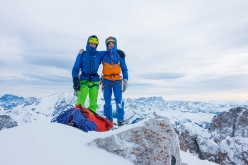 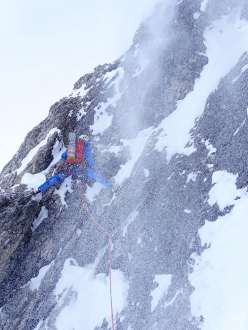 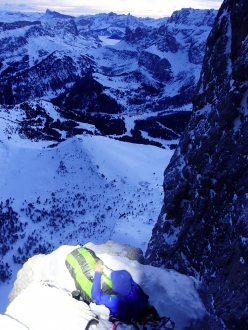 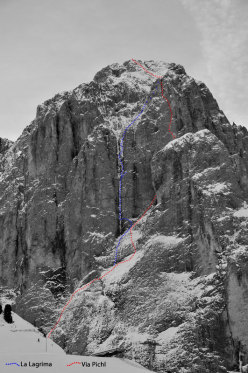 From 21 to 22 December 2020 Titus Prinoth and Alex Walpoth from the South Tyrol Italy, completed the first repeat of La Legrima on the northeast face of Langkofel / Sassolungo in the Dolomites. The difficult mixed climb was established in 2013 by Adam Holzknecht and Hubert Moroder.

The news dates back to the end of last year but, in keeping with the hallmark style of the Val Gardena climbers, it’s sickered through only now: on 21 and 22 December 2020 Titus Prinoth and Alex Walpoth made the first repeat of La Legrima, a difficult and ephemeral mixed climb first ascended in 2013 on Langkofel / Sassolungo in the Dolomites by Adam Holzknecht and Hubert Moroder.

Legrima, meaning tear in local dialect, drops steeply down the mountain’s NE Face and very rarely comes into condition. After courting the line for years Holzknecht and Moroder had managed to seize the right moment and now, seven winters on, it finally formed adequately once again. Not wanting to miss the opportunity Walpoth and Prinoth set off at 7am on 21 December from Passo Sella and reached the base of the route on snowshoes.

Legrima shares the same start as the Pichl Führe and since Walpoth had already climbed this Dolomites classic on several occasions, both in summer and in winter, he took the initial lead. After the traverse they reached the first snowfield and the base of the "tear", but instead of the hoped-for ice they encountered rock snow.  Walpoth climbed the first pitch, placing what he described as a"psychological" cam on the lip of the roof, only to lose his footing a few moves higher and fall. Fortunately, the cam held and the unexpected tumble "broke the ice”; the two laughed, then Walpoth continued to the belay. Prinoth now took the lead and conditions remained difficult; he constantly had to swap from climbing with ice axes to climbing with his hands, often the ice was poor and throughout the entire climb they had to fight against spindrift funnelling down from the huge amphitheater above.

Night fell and, climbing in the dark, the duo managed to reach the place they had planned for the bivouac: two poor ledges, 10m apart, on unconsolidated snow. Walpoth's platform kept giving way and at one point during the longest night of the year he was forced to sit down, clipped to his harness, and wait for dawn as he endured "the longest hours of my life". Prinoth didn't fare much better, but the first rays of light brought fresh motivation and any thoughts of a retreat were cancelled by the allure of the blue ice shimmering above.

Walpoth slowly thawed on three amazing pitches of thin but good quality ice, then Prinoth led them to easier ground. They continued up through the amphitheater, breaking a trail through the fresh snow to reach the 3181m high summit. The cold north wind blew too hard to stay on the summit for more than just a few minutes, and at 14:00 they started the descent they knew well from previous ascents. Despite beginning to feel tired the descent ran smoothly and after a series of abseils and more trudging through deep snow they retrieved their snowshoes and returned to the car.

17.01.2013
La Legrima, Adam Holzknecht and Hubert Moroder make first ascent of the icefall on Sassolungo North Face
On 7 and 8 January 2013 the Catores Mountain Guides Adam Holzknecht and Hubert Moroder made the first ascent of "La Legrima" (WI6 M6 V+, two sections of A0), the great ice and mixed line up the North Face of the Sassolungo (Dolomites) long pursued by numerous ice climbers.

03.03.2021
Civetta Dolomites double: first winter ascents of Chimera Verticale and W Mexico Cabrones
Two huge climbs were repeated on the northwest face of Civetta in the Dolomites, Italy: Chimera Verticale by Titus Prinoth and Alex Walpoth, and W Mexico Cabrones by Alessandro Baù, Thomas Gianola and Giovanni Zaccaria. This is the first time both routes have been climbed in winter.