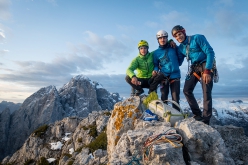 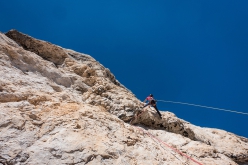 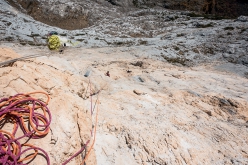 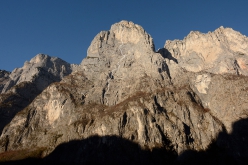 It’s the usual trio of young Val Gardena mountaineers, Titus Prinoth, Alex Walpoth and Martin Dejori, who set a mark at the start of November with a major new addition to the immense Terza Pala di San Lucano, in the Pale di San Lucano group of the Italian Dolomites.

The trio - without a shadow of doubt currently one of the strongest teams in the Dolomites - travelled to the secluded San Lucano valley at the end of October in order to establish Guardiano dei sogni, Guardian of dreams. This takes a direct line between via Paolo Armando and Spazzacamino, is 1400m long, and was established with three bivouacs from 1 to 4 November 2020. Difficulties are in the region of VIII + A0 and the line, needless to say, is protected by wires, cams and pegs. No bolts. These didn’t even find their way into… their rucksacks.

Guardiano dei Sogni follows Ritorni, first ascended on the nearby Seconda Pala by Walpoth and Prinoth in June 2019, and the first repeat (and first winter ascent) of Storia Infinita on Monte Agner in the same massif by Dejori and Prinoth at the end of 2015.

More details of this new undertaking "which is particularly important" to the young climbers on the "incomparable south face" will follow in due course.