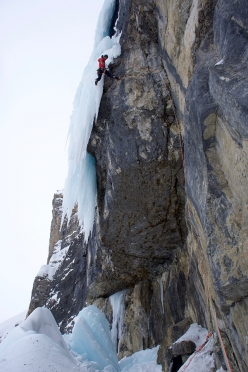 Daniel Ladurner reaches the ice after having bolted a direct start to Jumbo Jet in Val Lietres, Dolomites
Photo by Hannes Lemayr 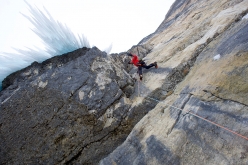 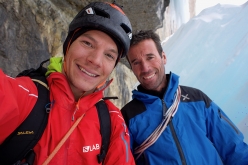 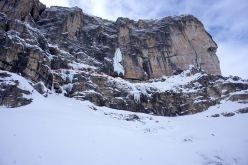 In Val Lietres (Puez - Geisler group, Dolomites) Daniel Ladurner and Hannes Lemayr have added a direct start, up rock, to the famous icefall Jumbo Jet. With this new variant the route tackles overall difficulties up to M7 WI5+.

Val Lietres once again, and once again Daniel Ladurner and Hannes Lemayr who after having made the first ascent of the indisputably beautiful Once in a lifetime up Col Turont have now added a direct start to Jumbo Jet, the famous icefall situated the other side of the valley.

The new section is 25 meters high, up overhanging rock to the right of the drip protected by bolts and pegs. Difficulties up to M7 lead to the curtain of Jumbo Jet, from where the usual 60 meters of "outstanding ice climbing" lie in store.

The new start has been called 747, and Ladurner explained to planetmountain.com "Hannes and I made our way up into Val Lietres on several occasions to climb Jumbo Jet, but since the dagger hadn’t formed all the way down to ground or it had already collapsed, we decided to establish a new variation that would lead up to the ice. After a failed attempt last year we succeeded on 5 March. I bolted the new section so that the route can be climbed even when there is little ice. It’s located at an altitude of 2250 m and faces north, so it can usually be climbed until the end of March."