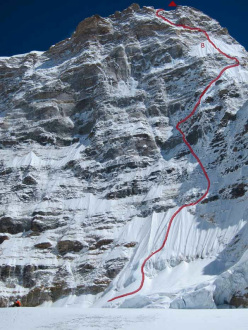 Janak West Face, first ascent in the Himalaya by Marcic and Strazar

The Slovenians Nejc Marcic and Luka Strazar have made the first ascent of Blue Racer (80°, M4, 1100m), a new route up the virgin West Face of Janak (Himalaya).

Urban Golob reports about the Slovenians Nejc Marčič and Luka Stražar who have successfully made the first ascent of hitherto unclimbed West Face of Janak, the 7090m peak close to Kanchenjunga, the third highest giant in the Himalaya.

Last year the two young alpinists won the Piolets d'Or for their ascent of K7 West and as Marko Prezelj correctly states, they certainly haven't rested on their laurels: the virgin West Face of Janak is truly impressive and the Slovenians climbed it via a 1100m high line, alpine style over two days encountering difficulties up to M4. The last 350m were shared with the SW Ridge route climbed in 2006 by their compatriots Štremfelj and Zalokar.

Naturally we will find out more in the future; glance at the photo and remember that the altitude exceeds 7000m to find out why. More details will follow soon but in the meantime Stražar, writing on www.friko.si, has confirmed "the route wasn't difficult technically, the greatest difficulties were the cold and the strong winds on the second day. Along the route we encountered a lot of hard ice. The ascent lasted two full days, we reached the top a little before two o'clock in the afternoon and returned to ABC at eleven o'clock in the evening. We had originally planned a line up the central part of the face, which due to the poor snow conditions remained unclimbed and so in the upper section we joined the route climbed by Andrej Štremfelj and Rok Zalokar in 2006."