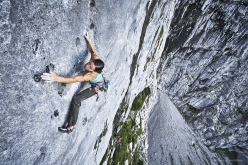 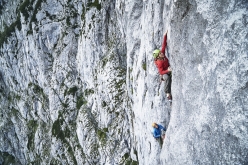 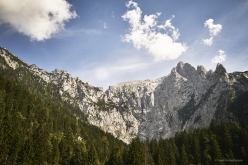 Hoher Göll, Berchtesgadener Alpen, which hosts a flurry of rock climbs including Scaramouche put up by Alexander Huber and Thomas Huber in 1989
Photo by Frank Kretschmann 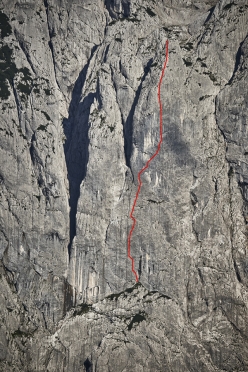 On Hoher Göll in the Berchtesgadener Alps, German rock climber and alpinist Ines Papert has repeated Scaramouche (300m, 8a), a rarely repeated climb put up by the Huber brothers in 1989.

Repeating an 8a doesn’t make headline news nowadays, but when the 8a in question is located up in the mountains, was established in 1989 by the Huber brothers and has been repeated only half a dozen times in just under three decades, then evidently there’s something very special about the route.

The climb that was repeated at the start of September is called Scaramouche and breaches the 300m high West Pillar of Hoher Göll in the Endstal valley close to Berchtesgaden, established and freed by Alexander Huber and Thomas Huber with difficulties up to 8a. Apart from these technical difficulties though, the route is psychologically demanding as the bolts are run-out and the pro needs integrating with trad gear.

After having attempted the route in the past, on Sunday 4 September Ines Papert teamed up with Matthias Raiter and redpointed the 9-pitch line, sending all pitches first go except for the third which she sent on her second attempt. After the successful redpoint Papert stated "I have spent about 10 to 14 days in the route over the past years. I have cursed, doubted, and laughed. Seldom have I climbed a route that was as technically demanding. My greatest respect goes to Thomas and Alexander for their first ascent of this wall, at that time, in that style, in one of the most beautiful walls of our planet, in Berchtesgaden."

While on theme of Endstal, Huber brothers and beautiful routes that are rarely repeated: this valley also hosts Om, another masterpiece freed by Alexander Huber. Graded 9a, this single pitch sports climb had to wait from 1992 until 2009 for Adam Ondra to pull off the first repeat. Since then though... nothing.