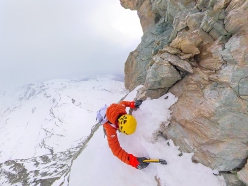 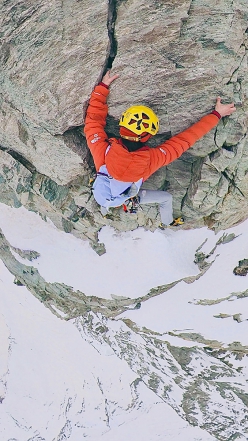 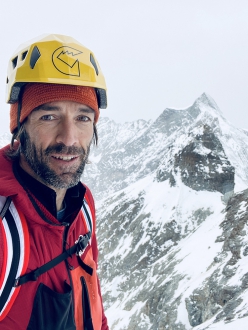 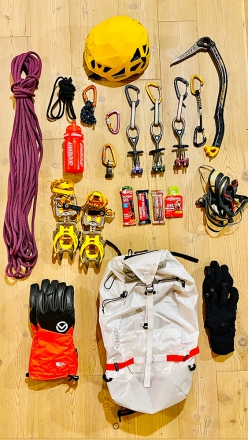 On Wednesday 3 March 2021 Italian mountaineer Hervé Barmasse soloed Via De Amicis on the Matterhorn. With this ascent the 43-year-old mountaineer from Valle d'Aosta closed the circle, becoming the first to solo all six ridges of the Matterhorn.

Closing the circle implies completing a personal goal. It indicates a series of individual experiences that, when put together, transform into a greater whole. In my case, soloing Via De Amicis means I have become the first to have soloed the six ridges of the Matterhorn: the Lion Ridge, the Hörnli Ridge, the Zmutt Ridge, the Furggen Ridge, the Deffeyes Ridge and, last but not least, the De Amicis route.

How often have I looked up at the Matterhorn and scrutinised its flanks? Countless times no doubt, and despite the fact that many years have passed, whenever I look upwards it’s still as if my eyes set sight on this mountain for the very first time. I have “special” eyes for this peak and it’s with great pleasure that I’ve shared many first ascents with it, often alone. It’s precisely when you find yourself alone on a mountain that you begin to comprehend who you really are, that you take off your mask and your armour, that you strip yourself bare and give the best you possibly can, because there is no margin for error. And you do all this not for fame, or glory or money even. No, you do it because - incomprehensible to most - it makes you feel good.

Of course, I understand those who say to me “you shouldn’t be doing these things". I myself wouldn’t like to see my daughters climbing the Matterhorn, on its crumbly and friable rock. But I disagree with those who reckon I’m crazy, or those who believe that those who climb solo despise their lives. Solos have existed for as long as mountaineering itself. Obviously the risks are far greater, just like the sensations and emotions that are amplified by our subconscious in order to recognise the boundaries that you must not cross.

My first important Matterhorn solo dates back to 2002, nineteen years ago. I chose Via Casarotto Grassi which, in addition to having been established by the legendary mountaineers Renato Casarotto and Gian Carlo Grassi, had only been repeated once before in winter, by my father with his friends. Since that solo I have continued to climb alone up routes that had never been climbed before in that style, until I added a new one of my own, which is perhaps the epitome of what a mountaineer can achieve. But I only did so when I was inspired by something or someone, like on Wednesday 3 March.

It was all grey and it was snowing. At 7.45 am I cautiously skinned up from Breuil Cervinia to the base of Via De Amicis. The forecast had been for sun all day, yet I struggled to see the peaks in the Monte Rosa massif.

Shaking off all those negative thoughts that weighed me down far more than my rucksack, I started to climb while thinking about the history of these six ridges. The first to complete this "sextuplet" was Luigi Carrel (known as Il Carrellino) with various different climbing partners, but no one had ever climbed them all on their own. And since I’d already "bagged" five, including the fearsome Déffeyes route, why not give this last one a try?

I knew I was capable of doing it and I did so savouring every single hold, climbing lightly where the rock was particularly loose. Only once, on the famous Crétier section, did I use the rope for a few meters; using a technique I invented on the spur of the moment and which, had I fallen, would not necessarily have avoided the most serious consequences. But even this decision was carefully considered, much more than one might think. In the end, everything went smoothly and at 4.30 pm sharp I was back in Cervinia where my parents were waiting for me to share a beer.

A few days have passed since that solo and the idea of ​​having followed, in an original manner, in the footsteps of both Luigi Carrel and my father, fills me with joy. I did not set off on this climb with the presumption of setting some form of record, but instead because, all of a sudden, I needed to carve some time out for myself. To enjoy a fleeting moment that I accepted readily, in order get to know my inner self, through a solo climb that, through its very essence, provides knowledge and awareness. Knowledge of oneself, of one's strengths and weaknesses. Awareness about the importance of your loved ones, like my family and friends, and of those who admire you from afar and make you feel special. Even if you are not very special at all.

21.04.2011
Hervé Barmasse, the new Matterhorn route and the exploration of the Alps
On 9 April, after 4 days on the wall and three bivvies, Hervé Barmasse reached the summit of Picco Muzio via a new 700m route up the great pillar located on the South Face. This is the first stage in a trilogy to explore the Alps during which Barmasse plans to climb Mont Blanc and Monte Rosa.