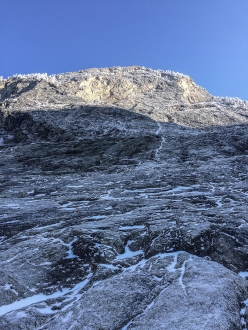 Hansjörg Auer: the scary, risky rappel, the video and interview

Interview with 34-year-old Hansjörg Auer after his extremely risky abseil off the South Face of Achplatte in Austria. The video of this abseil has monopolised the climbing community’s social media.

We first saw the video as soon as it appeared on Instagram, when it had less than 100 views. But we have to admit, we immediately discarded it, it was simply "too much". Too close to the limit, too wild, too "non-educational". Simply too much. But as the video made its way around the internet - yesterday on Facebook it had been viewed over 500,000 times - we wondered if maybe we shouldn’t get in touch with man who filmed the clip, Hansjörg Auer. That is, to talk to the climber who in the past has been close to the knife’s edge - his ground-breaking free solo of the Fish route on Marmolada in the Dolomites after quick abseil inspection and in almost complete solitude back in 2007 immediately springs to mind - in order to find out more about what exactly happened that day. It’s clear that what the 34-year-old Austrian did up on the mountain must be considered an emergency manoeuvre. And it’s equally clear that he agreed to answer our questions not because he’s in need of greater media attention but because, as he told us, he believes "it's appropriate, since it seems that the climbing community has become very involved and it’s fair and perhaps even necessary to provide more information about what happened."

Hansjörg, can you tell us what exactly went on up there?
I wanted to climb a thin line of ice on the south face of Achplatte; it forms very rarely and I had noticed it coming into condition a few days before. I know the wall from summer and in 2005 I also established a new rock climb on it. I knew therefore that the actual climbing wouldn’t be too steep. Initially I actually didn’t want to take any other gear with me (rope, harness, ice screws), since at the end of the route you can descend by traversing rightwards along a ledge. But as I set off from the car I decided to take a rope with me, because through my binoculars it seemed as if the ice was very thin.

And then?
I completed the approach and then I started climbing. After the somewhat easy but snow-covered slabs the terrain started to become steeper and the climbing more difficult. The line of ice was more frozen snow than actual ice. Soloing the final ten meters weren’t particularly easy but I simply thought that the difficulties would soon ease off.

But then...
All of a sudden I found myself on a small ledge: I couldn’t go up or down, in particular because I was climbing solo. Thank God I found that tiny stone, frozen in the ice at the height of the small ledge. I decided to rappel off it, for about 30 meters, down 80° terrain. Then I found an easier exit to the left and climbed this to finish the route.

Could you not just have called for help?
Nobody gets up there in a rush ;-)

You said you had no other option. Presumably mistakes were made though for you to find yourself in this situation?
Correct. Had I been without a rope, I would have had to try and downclimb. I’d more or less climbed off-route and having reduced the gear to the essential left me with few alternatives.

How do you judge that moment?
It was a situation which one doesn’t get oneself in to voluntarily. But it can happen and the most important thing is to find a solution on your own. And I did.

You’ve done lots of dangerous and scary stuff in the past. First and foremost the Fish route perhaps. So how do you rate this experience compared to others you’ve had in the mountains?
For a short time the situation was pretty shitty. But sometimes you have no other choice in the mountains, and you can’t cancel a decision already made. This situation was simply the result of a wrong decision and in that instant you keep calm and find a way out. But it is precisely moments like these that make mountaineering, off the beaten track and with a minimalist style, interesting in some ways.

Usually lucky near misses end up as stories. You though chose to post this video online. Why? And did you expect this reaction?
After each climb there is always a story to tell and near misses are naturally the most intense. But obviously I don’t go climbing to produce stories of this sort. In hindsight I’d say yes, it was a mistake to share the video online and maybe I was little naive thinking it would soon get swallowed up in the internet.

Out of interest, why did you film it?
Good question. I pressed record because I simply though that this isn’t something I’ll be doing every day. And things that aren’t seen or done every day are the things I prefer to share. I’m totally honest about this. But seeing the reaction, maybe I should have just shown it only to my closest friends, nothing more.

You know that some people reckon you’re crazy?
I don’t think it’s cool at all that many people call me "crazy". Perhaps I have a different approach to risk, and sometimes have ideas about doing things in the mountains that others would reject immediately. But that doesn’t make me crazy.

What motivates you Hansjörg?
Every burning passion is better than following the flow with everyone else and with a flame that only burns half as bright. Regardless of if you like pulling hard on crimps, climbing up cold and frozen faces or up the highest mountains. The important thing is to have a passion. I wrote the following sentence earlier this year and I think it fits in well here: "To enjoy the undreamt intensity of life again and again is one thing what drives me to set off for new adventures." But in order to achieve this, you have to step out of your comfort zone. Which might mean dealing with moments like I did up on the south face of Achplatte.