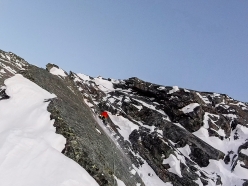 Hansjörg Auer making the first winter ascent of the North Face of Innerer Hahlkogel, Ötztal, on 29/01/2018
Photo by Simon Messner 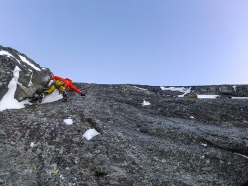 Simon Messner making the first winter ascent of the North Face of Innerer Hahlkogel, Ötztal, on 29/01/2018
Photo by Hansjörg Auer 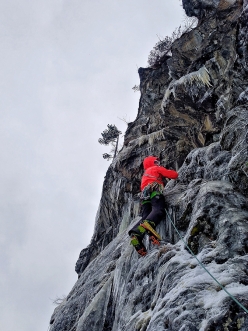 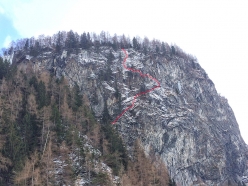 On 19 January 2018 Hansjörg Auer and Tobias Holzknecht made the first ascent of Nordstau, a new mixed climb in the Ötztal, Austria. On 29 January Auer teamed up with Simon Messner to carry out the first winter ascent of the nearby North Face of Innerer Hahlkogel.

The first climb was carried out on 19 January with Tobias Holzknecht up Burgsteiner Wand, a 200 m high face close to Längenfeld in the Ötztal valley, where the duo established Nordstau (WI5-/M5). The route crosses and consequently uses two bolts of a summer route, but then continues independently via increasingly difficult terrain past "some cool moves on ice, rock and frozen grass." Apart from the two initial bolts, the five pitches need protecting and the first ascentionists removed the only peg they used.

This "nice little mixed route" was nothing more than a warm-up for Auer’s main project, namely the first winter ascent of the North Face of Innerer Hahlkogel, carried out on 29 January with Simon Messner - yes, son of Reinhold Messner and a great alpinist himself.

Auer told planetmountain.com "After having climbed the North Face of Hahlkogel four years ago, the North Face of Inner Hahlkogel has always been on my list of things to do. Local climbers attempted it in the past, but the problem is that the face is really slabby, never particularly steep. It’s hard to find good ice conditions, and much of the climbing is on slabs, past thin cracks or small edges. Simon and I repeat the climb Untauglich 02, a summer route graded UIAA VII- which I freed in 2002 with Matthias Nössig. We came prepared for a bivouac, but in the end we managed to climb the face in a single day."

03.04.2014
Hansjörg Auer and the Oetztal winter traverse in Austria
On 12 -13 February 2014 Hansjörg Auer traversed the ridge line that leads from Gamskogel to Wilde Leck high above the Ötztal in Austria. A long traverse, first carried out many moons ago by the talented Austrian alpinist Reinhard Schiestl.