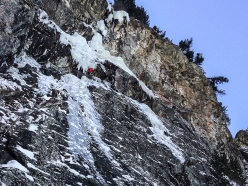 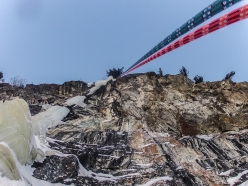 On 19/01/2017 Hansjörg Auer and Reinhard Obweger made the first ascent of Freizeitstress, a new mixed climb in Ötztal, Austria.

Ötztal isn’t the most famous ice climbing venue in Austria and as such it tends to be off the map of most ice climbers, but this valley close to Innsbruck holds a number of “little gems” that make a winter trip there highly worthwhile.

Most drips are located in the upper reaches of the valley close to Längenfeld and Sölden, and highlights include Eiserner Vorhang, Liftspur, Esso, Burgsteiner wasserfälle (Albert Grüner, Reinhard Schiestl & Co in the 80’s) and Feierabend to name but a few.

On 19 January 2017 local alpinists Hansjörg Auer climbed a new line together with Reinhard Obweger they believe is one of the coolest in the entire valley. Called Freizeitstress and located close to Feierabend (WI 5-), the new 110m outing breaches difficulties of M5, WI 6. The mixed sections on the first pitch need to be protected by natural gear while one peg was used and left in-situ on the second pitch, while the upper section climbs superb ice.

Freizeitstress joins a steadily growing list of ice climbs Auer has added to his valley in recent years. These include Mannerschnitte, Spongebob, Lucky Strike, Rätselburg and Elfenbein.