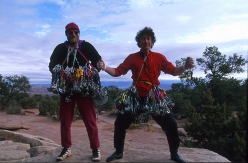 Grivel and the equipment for alpinism and climbing: Steve Haston geared up for some crack climbing
Photo by Laurence Gouault 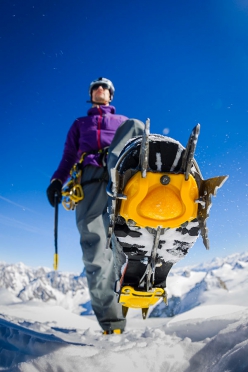 Grivel and the equipment for alpinism and climbing: Steve House with Grivel crampons
Photo by Lorenzo Belfrond 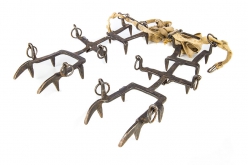 Grivel and the equipment for alpinism and climbing: the historic 12-point crampons
Photo by Lorenzo Belfrond 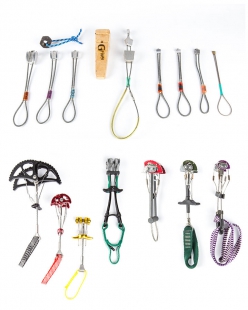 Grivel and the equipment for alpinism and climbing: pegs, nuts and Friends
Photo by Lorenzo Belfrond

Second episode dedicated to Espace Grivel, or to the first 200 years of the history of Grivel and alpinism.

Maybe, in 3,000 years time, when they find that "thing" with its two toothed half-wheels, someone might think it’s a magical object, or perhaps a collectors item object. Then, realising that those wheels widen and retract, others will hazard a guess and say it’s a game for children. Because, let’s be honest, who can imagine Friends in 5018? People will probably have stopped climbing at least 2,000 years previously. Nobody will climb any longer. There’ll be no need for it. Ever since ever man travels with the power of the mind… forget all about teleportation, so popular in twentieth century science fiction novels. And since the summit of Everest or Cerro Torre are within everyone's reach, adventure and exploration will be "played out" in the most distant galaxies, like Andromeda or even billions of light years further away.

Nobody will understand those gadget therefore, how those Friends really work. No one will know that in the 1960’s someone invented nuts (or wires) and subsequently Friends for what became initially known as clean climbing and then trad climbing. But why am I thinking about all this? Maybe because I'm traveling alone. But above all because I’m still wondering about the question Gioachino Gobbi asked me as he showed me around his Espace Grivel, the "wonder room" in Courmayeur that embraces the first 200 years of Grivel and alpinism.

"Do products trigger the evolution of techniques" Gioachino had asked me point-blank "or did the new techniques demand new products?" He - as usual - provokes. And I - as usual - agree a bit while disagreeing slightly. Because the question is a bit like what came first, the chicken or the egg... Even if it’s clear that the two things "interact, and there are many examples that prove this", the question begs for a search for similarities and examples. And so I follow his line of thinking and come up with those "many examples" that accompanied the history of mountaineering. Also there’s also the question of "following"... Put in other words, Gioachino’s question is: "200 years of products and 200 years of alpinism merely run parallel, or does one lead and the other follow? What follows what? And is there a winner?"

Stop, too many questions. At least, too many for me. Let's tackle them one by one. Let's start from the beginning. Almost the very beginning. In the Espace Grivel there is a time line that follows this synchronous evolution, placing objects in relation to the major breakthroughs of humanity, such as the discovery of DNA. Let's not exaggerate though. Those fundamental events for humanity, Gioachino explains, "Are there to put things in perspective." And it goes without saying that we, with our mountaineering, are infinitely less important. But even so, we can still say a thing or two about the development of technique and new products. And I can almost hear Gioachino rattling off the fundamental steps of this story that repeats itself (again and again) right from the start.

For example "Without the invention of the carabiner, rope techniques couldn’t have developed." Otto "Rambo" Herzog had designed a carabiner for climbing in 1910, copying ones used by firemen. In truth, this revolution didn’t go down too well by (legendary) characters such as Paul Preuss who viewed this object as something "artificial". A little like 12-point crampons with their front points were frowned on by ice climbing purists such as André Contamine, the man known for his highly flexible ankles. All of this while "without crampons, steps would have continued to be cut for clients. While without front-point crampons mountain faces such as the North Face of the Eiger would not have climbed."

So new technical means are needed for new techniques, that push onwards towards hitherto unexplored frontiers. Even when they sometimes hit upon "ethical" resistance. So perhaps this is how the future is created, by striking the balance between these positions and adding the necessary time to mature. Giochino’s mantra, and obviously the history of alpinism, would seem to confirm this theory. In fact "without ice screws, belaying on ice would still be an impossible dream." And "without stainless steel pegs, reusable again and again, the American big walls would never have been climbed. And without the assortment of wires, clean climbing would never have developed as much as it has done." And, for the record, "Without cams (Friends) trad climbing would never have developed quite so much."

I’d like to add that all this would never have come about had it not been for the expansion bolt and the advent of aid climbing. But I don’t want to make myself too many enemies among the purist mountaineers. "Mamma Mia!" replies Gioachino to my hypothesis about what would have happened had Vibram soles not been invented. To which he immediately adds, just as rightly, that "Without rubber soles we’d all still be climbing 7a, b, c...". At this point I feel like clarifying that these historical recourses also occur in alpinism, not only in the "major" history. And not just in "free" climbing (clean, trad etc.) and "aid" climbing, but also with the actual gear. For example, the first ultra-light crampon was introduced by Grivel in 1933 at the request of the Aosta Military Academy for the Mezzalama Trophy ski patrollers. It’s as if to say that although neither party follows the other, what is certain is that there is mutual listening and synergy between "new techniques" and "new products". Indeed, perhaps it is because there is a huge shared passion that unites climbers and manufacturers (who are often one and the same thing) that there such a strong drive.

Thinking about it, Gioachino's final statement also seems to confirm this: "Without antibots on crampons, summers would be deadly". This is genuine interest, one might say. An interest that has lasted 200 years. By the way, if they found an antibot in 5018, what would they think it is? But above all, will there be snow in 5018? And what sort of snow will it be?

Gioachino Gobbi
Born in Courmayeur (Italy) on 24 August 1945, Gioachino graduated from a classical lyceum and earned a degree in Economics. He immediately dedicated himself to his passion for sports products and worked for numerous sports companies. In the '80s-90s he also worked in the public administration, as a councilor of the Municipality of Courmayeur. In the early 80s he took over Fratelli Grivel. Based in Courmayeur, this company dated back to 1818 and made equipment for mountaineering, typically ice axes and crampons. Gioachino Gobbi opposed the end to this tradition and took over the company. In 2007 the Rossignol group decided to sell its stick factory in Valle d'Aosta and at the start of 2008 the Gobbi family took over this company, too. In doing so they salvaged a company that was intrinsically linked, both economically and socially, with the local territory. Gioachino is helped by patient Betta and has two children, Oliviero, 40, and Caterine, 30, and a nephew, Carlo.

13.07.2018
Grivel: history, wonders and the first 200 years of mountaineering
A day with Gioachino Gobbi in Courmayeur, examining the history of Grivel and alpinism in the brand new Espace Grivel that will be inaugurated on 5 August 2018.