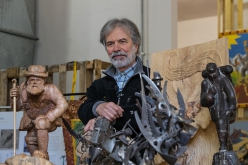 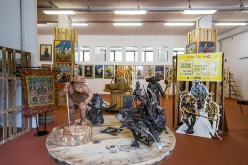 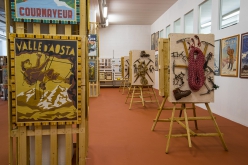 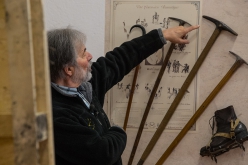 Grivel: history, wonders and the first 200 years of mountaineering

A day with Gioachino Gobbi in Courmayeur, examining the history of Grivel and alpinism in the brand new Espace Grivel that will be inaugurated on 5 August 2018.

"Seven or eight generations are encompassed in 200 years. About seventy generations since the birth of Christ... less than a blink of an eye compared to how old the world is.” Mont Blanc lies up there, and seems to look down on us almost benevolently. It’s a magnificent day, and the timeless breath of nature really does seem never-ending. Yes, 200 years are nothing: I agree with Gioachino Gobbi, who is about to open the doors to his wonderland. It’s a sort of time machine that retraces Grivel's 200 year history. Better still, the two and a bit more centuries since the advent of alpinism. Because if mountaineering, or rather the concept of taking to the mountains, starts from that fateful 8 August 1786 - the date of the first ascent of Mont Blanc carried out by Dr. Michel Gabriel Paccard and the crystal hunter Jacques Balmat - Grivel seems to have come to life just over 3 decades later, in 1818, as engraved on the old workshop lintel. So precisely 2 centuries ago.

It was back then that the Courmayeur family of blacksmiths, the Grivel family, began to convert traditional tools used by farmers on the steep mountain slopes in order to meet the needs of those first rich travelers who, enraptured by this new and weird elitist fashion, wanted to climb mountains. A passion, for mountaineering, which even nowadays remains incomprehensible to some, but which Grivel never abandoned. So for the last 200 years equipment has been produced here (in jargon, hardware) for mountaineering, often with the introduction of bright new solutions, always with original ideas and never taken for granted.

"We will never know if its the achievements of mankind that fuel technique, or vice versa", Gioachino tells me as we enter. He’s dressed much like an artist today, with a bohemian style sculptor's coat and cap. Except that we’re not in 19th century Paris but at Courmayeur, in the historic headquarters of Grivel, and he is opening the doors to his "laboratory". The Gobbi family took over from the Grivel family in the mid-1980s. And it's no coincidence that we talk about families. There is continuity not only in the names, but also in the history with this passing of the baton. Gioachino and Betta (the Gobbi family) are the heart and soul of Grivel. Just like Courmayeur and its mountain, Mont Blanc, is where it all began. And where all great male and female mountaineers stopped by.

But here it is, the "laboratory". Where gear used to be produced is, in addition to what you would have expected, in particular everything you would not have expected to find to recount this long story called alpinism. “Don’t you dare call this an exhibition" Gioachino warns as I enter "this is a living space that transforms constantly. It's not a museum, here you’re allowed to touch the objects.”And it's true. It really is a leap from the present into the past. Almost a sort of time suspended. Here you can admire ice axes and crampons in all their shapes and different interpretations. You can weigh today’s modern and extremely lightweight models and compare them with those used by the early nineteenth century mountaineers, from which it all began. Or you can dwell on the transformation of mountaineering boots with studded soles (designed to stop the sole from wearing out) used by the first mountaineers, to those used by Edmund Hillary and Tenzing Norgay to reach the summit of Everest in 1953, or those used by the Italian expedition to K2 in 1954. Talking about the touching these objects… yes, I caressed those boots shrouded in history. And I was taken in by the first 10-point crampons that were designed right here.

I can almost see him, Henry Grivel "fabricant de pics et rampons pour glace" while Oscar Eckenstein, the great mountaineer and English engineer, showed him that very drawing that I'm admiring now. That was back in 1909 and the best blacksmith in Courmayeur rose to the challenge. That’s how the crampons came to life that revolutionised mountaineering on frozen mountain faces. But this wasn’t the only revolution. Family traditions need to be respected. And so you can admire and,if you want to, caress, the 12-point crampons with those two additional front points that cut (literally) into the ice and carved they way into the evolution of mountaineering. They were forged in 1929 by Laurent, the son of that Henry who had forged the aforementioned first 10-pointed crampons. A question of style one might say.

As stylish, immensely, as the authentic journey (also historical) through the illustrations dedicated to mountaineering. Starting from the start of alpinism with the famous prints of de Saussure’s ascent of Mont Blanc. Via those whose facts were almost never possible to capture with a camera. To the famous magazine covers of Domenica del Corriere, Gazzetta dei lavoratori and Illustrazione del popolo. A colorful and magnificent world that interprets, with imagination and at times for propaganda purposes, the meaning of the mountains and mountain climbing in the first half of the last century.

But earlier we were talking about men and women. About male and female mountaineers. And about those who supported them, inventing the most suitable equipment, for their immense love for the mountains and adventure. Many alpinists have stopped by here. And there are many testimonies in this sort of “room of wonders" that embraces Grivel’s, and mountaineering’s, 200 year history. There are many, many stories. Too many perhaps to be told in a single go. In just one single space. And this is perhaps why Gioachino talks about an open and constantly developing space. I'm about to ask him if that's the case, but I realise that I’m alone in this "timeless space". I go out and find hi. “You see" he tells me “even after so many years I still haven’t got used to so much beauty.” Up there, motionless, Mont Blanc shines majestically.

24.07.2018
Grivel 200: alpinism, climbing gear, techniques and evolutioN
Second episode dedicated to Espace Grivel, or to the first 200 years of the history of Grivel and alpinism.