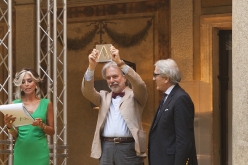 Gioachino Gobbi receives the award Compasso d'Oro - ADI 2016 for the design of the Twin Gate carabiner.
Photo by archivio Grivel 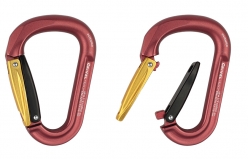 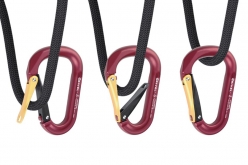 It's not every day that an outdoor company wins the Compasso d'Oro ADI, the prestigious design award. The company that has been honored with this accolade is Grivel who, with its Twin Gate Carabiner, has received one of the 2016 Compasso d'Oro, in particular the one dedicated to the category Design for the individual. But first things first... for those unfamiliar with Compasso d'Oro ADI, let’s just say it’s one of the world’s most famous, authoritative and important design awards. Unsurprisingly the "compass" of the ADI Association for Industrial Design has a history that dates all the way back to 1954, when it was conceived by the architect and master of design Gio Ponti. Initially the prize was awarded once every three years, while more recently it has been awarded once every two years. Just to give an idea about its importance: this year the Index Award for excellence in the category Designed for mobility went to the Ferrari - FXX K, while past awards have gone to immortal “works of art" such as the typewriter Lettera 22 Olivetti, the car Fiat 500, the TV Brion Vega, the Grillo telephone and the Alessi coffee maker.

But let’s get back to us, to outdoor products and the Twin Gate carabiner; this is a completely new carabiner designed to solve the problem of screwgate carabiners… that you forget to lock. As is well-known, if locking biners are not locked the gate can open accidentally. Well, the Twin Gate replaces the screwgate with two opposing gates that ensure that the rope, once inside, cannot come out. A simple, neat and different way of dealing with a problem and it is perhaps for this reason, too, that the idea received the award. We can still remember - two years ago possibly - when we were presented with the Twin Gate and its two opposing gates at the ISPO. Clipping the rope in seemed like a puzzle, one of those magicians tricks. Then they showed us how to use it properly and.. and yes, with practice the magic and embarrassment disappeared. And we too appreciated the intuition and originality that led to the desired solution: safety.

After congratulating Grivel, in the form of Gioachino Gobbi, and of course the person who oversaw the design of the Twin Gate, namely R&D Grivel led by Maurizio Gallo, we’d like to point out that research and design of outdoor products, in particular for mountaineering and climbing products, isn’t merely at an extremely advanced stage, it is also a veritable passion. This has indeed always been the case: Grivel itself was founded in 1909 when Oskar Eckenstein (engineer and mountaineer) commissioned the first real crampons. And there are plenty of other examples and pieces of gear that are the result of this passion, this need climbers have to improve gear in order to climb the mountains. Just think of Cassin, or Lowe or Chouinard to name but three. So this award is not only something which is appreciated, it is also an award to those who resist, innovate and search for new paths and solutions while trying to improve constantly. Which, if you think about it, is one of things that climbing mountains teaches.

XXIV Compasso d’Oro ADI
The awards were celebrated at Palazzo Isimbardi in Milan. 13 Compasso d’Oro were awarded, as were 56 special mentions, 3 awards 9 Targa Giovani (Youth section awards), and 12 Compasso d’Oro lifetime achievement awards, of which 9 went to Italian designers and entrepeneurs, and 3 to international designers.