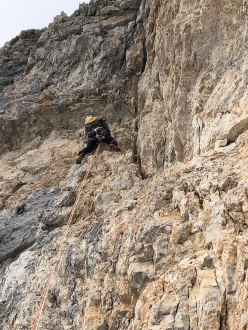 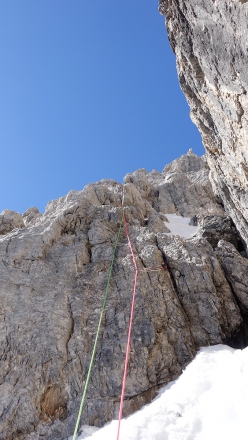 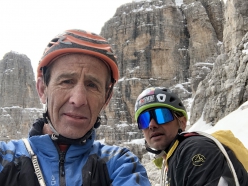 On Punta Centrale dei Sfulmini in the Brenta Dolomites Franco Nicolini and Davide Galizzi have made the first ascent of the rock climb La Piccozza nella Roccia. Nicolini reports about the route dedicated to his friend Giuliano Stenghel.

In the various groups of the the Italian Dolomites, there are various corners that are truly special, absolutely spectacular. In the Brenta Group, one of these is certainly Busa dei Sfulmini. Brenta Alta, Campanile Basso, Campanile Alto, the four Sfulmini towers and Torre di Brenta produce a view that is quite simply breathtaking.

Illustrious moments in the history of climbing in the Dolomites have been played out on these walls. Davide Galizzi and I also wanted to leave our mark on these sharp ridges, and a while ago identified this logical pillar on Cima Principale degli Sfulmini.

On our own, wrapped in a white and candid mantle that imposed a magical silence, we traveled up this pillar using only traditional gear (pegs and friends).

Most of the pitches we encountered were not particularly difficult, while a few proved challenging as we enjoyed the peace and sun that warmed the excellent yellow and black rock, so typical of the Brenta area.

The painting on the canvas was almost perfect, and completed when we thought of its name,  La Piccozza nella Roccia, the ice axe in the rock. The name stems from the fact that we stumbled across and an ice axe on a ledge, which had probably fallen from the Via Ferrata Bocchette Centrali. We left it where we found it, stuck in a crack at a belay.

I’d like to dedicate this climb to a great friend, legendary Giuliano Stenghel. A special person, remembered in a special place.

30.11.2020
Brenta Dolomites Campanile Basso West Couloir climbed by Francesco Salvaterra, Piero Onorati
A deep couloir is located between the west face of Torrione Comici and the shoulder of Campanile Basso. Uninviting in summer, this gully is an extremely interesting winter. climb. Mountain guide Francesco Salvaterra reports about his 15 November 2020 ascent with Piero Onorati.