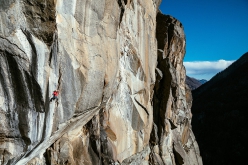 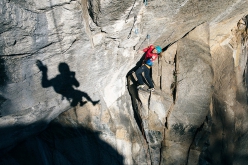 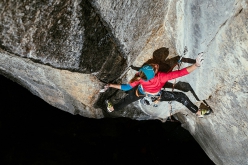 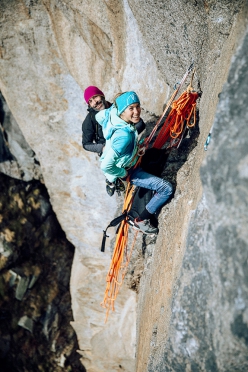 On Caporal in Valle dell’Orco, Italy, Federica Mingolla has made the first free ascent of 'Angels and Demons', the multi-pitch rock climb started by Ezio Marlier and Massimo Farina 15 years ago Mingolla completed the route with Leonardo Gheza before freeing it with Simone Papalia. Her report, as well as those of photographer Federico Ravassard.

In its 200 meters Angels and Demons encloses the story of four friendships, and how fate made them meet below this face, the Caporal in Valle dell’Orco.

So here I am again, looking at that rope hanging in the void, on the lefthand side of Caporal, where the face becomes even more overhanging and aggressive than its neighbour Colpo al Cuore. There, where 15 years earlier Ezio Marlier and Massimo Farina had begun establishing what for the valley in those days was a futuristic new line, and there where everything remained suspended in time, just like their rope, abandoned following the Massimo’s tragic accident a few months after the start of their adventure.

In some ways fate mocked us since a few years after that accident it just so happened that Adriano Trombetta found himself below Caporal with me, much younger than I am now. While we scrutinised the wall he indicated their line, and stated that one day he’d like to give it a go.

At that time I didn’t understand why an unfinished route could be so interesting, when there were so many other beautiful lines on Caporal just waiting to be repeated. Nor did I know what this line meant to Ezio, whom I didn’t yet know personally. But time passes and fate proved not just mocking but also cruel, taking my friend Adriano forever. And somehow his desire soon became mine, too.

One day Ezio and I finally met, the Aosta Valley became my home and so I finally got to know him, outside the crowded Sky Way cable car, in the mountain huts, on the mountain tops. Fate also made me team up with Leonardo Gheza and during this troubled year we’ve established an excellent climbing partnership as well as a beautiful friendship.

On Ezio’s explicit invitation, Leo and I made our way into Valle dell’Orco to resume efforts on the route that had lain abandoned for 15 years. Climbing those first meters with Leo established by Ezio and Massimo, thinking about their friendship, and mine with Adriano, was exciting. Can one route enclose so many emotions? Yes is the answer.

I began to comprehend this just the other day, while we were hanging off the ropes, bolting those last meters of rock before reaching the summit plateau, thinking about our lives and how they’d intertwined in such away that we were up there together that day. Well, in the end the route turned out to be quite a masterpiece, from top to bottom, better still, from bottom to top! And quite challenging, too!

On the 24th of November I went to get some pictures of me on with route with photographer Federico Ravassard and Simone Papalia, a climber who now lives in Valle dell’Orco. I had no particular ambition, all I wanted to do was get some photos and spend one last beautiful day up there before the arrival of winter.

But then the magic happened: I managed to climb the crux pitch after having checked it out really quickly while fixing the static rope for Federico. What next? The answer was obvious, even though the clock indicated two in the afternoon and we had very little time left to complete the route before the onset of darkness.

I think it was the first time since I started climbing that I felt I was in the FLOW. I felt like I was dancing on the holds, I seemed to be weightless, simply climbed as I had learned to do and since I’d worked the route a few days earlier while cleaning it, the moves were crystal clear in my mind. And my mind didn’t even need to think.

It was a beautiful ascent, although unfortunately it wasn’t carried out with Leo who, for obvious reasons, stayed locked down in Lombardy. I believe it’s the second hardest route in the valley, after Itaca nel Sole, and it’s likely to be the first route here where, instead of smearing, you have to force them into some extreme heelhooks to breach the 30° overhangs.

I’m really curious to receive some feedback from those who repeat Angels and Demons. In the meantime I can only thank Ezio, Leo, Federico and Simone, and dedicate this route to Massimo and Adriano who are forever in our hearts.

ANGELS AND DEMONS by Federico Ravassard

When we finally touch the ground after the last abseil, Caporal has been shrouded in darkness for an hour. The moon, still low, barely lights up the cliff as we begin to coil the ropes. The last few hours sped past like in a dream, and maybe Federica really was on another planet, judging by how focused she seemed while freeing all the pitches, without thinking too much about the race we were losing against the sun and other small troubles, like the huge slack she had to deal with while I, in order to save precious minutes, belayed both her and Simone on the previous pitch.

We started at one o'clock almost by mistake, and almost by mistake she made the first free ascent of one of the most difficult routes in the Valle dell’Orco. It was exciting to witness that harmonious flow of moves and manoeuvres from my front row seat, clipped to my static rope that almost constantly swung free in the void because the wall overhangs so much, as I tried to do justice to the beauty of everything that was passing in front of my eyes.

At the end of autumn everything about Caporal seems bigger: the contrasts between the light rock and the shadows become even stronger, the solitude is amplified by the cold that engulfs the valley, while the warm currents of ai increase the perception of being in a isolated bubble, far removed from everything and everyone. It truly is a magical place, rendered even more magical by the circumstances, by the climbers and by the stories of these walls.

We reach the car utterly wasted, someone rolls a cigarette and someone else uncorks a bottle of freezing cold wine. These aren’t really big-time celebrations, but that's okay nevertheless. I think back to the first time we climbed here and to the roads we each traveled since then, all different but still similar enough to ensure that at certain moments in our lives we would find ourselves dangling side by side, each doing what they’re best at.

The route is called Angels and Demons, like the ones that everyone always carries with them and that they try to leave on the ground before they go climbing. Sometimes one succeeds, sometimes not: but if there are places where only angels can follow you, then I think they’re shaped more or less like Caporal.

25.10.2020
Federica Mingolla stars in A New Morning
The video portrait of Federica Mingolla that explores the path the Italian has taken from her early sport climbing days to evolving into one of the world’s most compete climbers.

16.10.2018
Federica Mingolla climbs old projects in Valle dell’Orco, Italy
Italian climber Federica Mingolla reports about her first free ascent in Valle Orco, Italy, of an old project bolted in 2001 by Giovannino Massari and now graded 8a+. The route joins another nearby line freed by Mingolla a year ago: Occhi Nuovi 8a+.