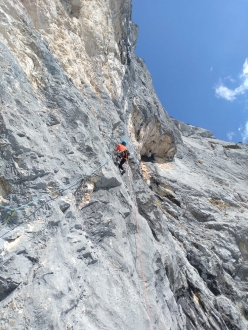 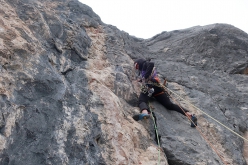 Barbara Vigl establishing pitch 9 of Erebor on the SE Face of Arnplattenspitze, Austria, with Benedikt Hiebl in 2021
Photo by Benedikt Hiebl 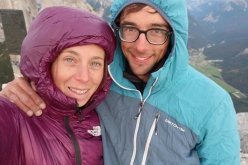 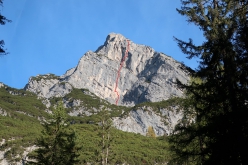 Last summer Austrian climbers Benedikt Hiebl and Barbara Vigl made the first ascent of Erebor, an 11-pitch climb on the SE Face of Arnplattenspitze (2171m) in the Wetterstein massif. Vigl reports

Situated on route to some of our favorite climbing areas around Innsbruck, we had often passed close to the south face of Arnplattenspitze. This face seems to stand all on its own above the village of Leutasch, and although it is striking, it is easily overlooked as it is located in front of the entire Wetterstein massif with all of its famous, south facing routes.

Benedikt Hiebl and I first talked about this peak at the start of 2021 and we discovered that we’d both had this wall in the back of our minds for some time, wondering if there were any routes leading up the triangular shaped rock face.

During our research we came across just one route, Querflieger, established in late 2019 by Phillip Wenter and Lukas Wimmer on the lefthand side of face. The central section still seemed unclimbed though and we began to wonder if it would be possible to find a way through.

In May 2021 we finally made it to the base, wading through heavy snow, following a steep path past mountain pines. With the approach being in some ways the crux of the day, we climbed only two pitches up partially loose rock. We established the second belay in a small cave at the end of a grey streak, the "grey sword" as we dubbed it and the main feature we wanted to climb. We left a fixed rope at our highpoint in order to continue quickly from there on our next attempt.

We returned in June, this time bringing bivy gear to avoide another arduous and time-consuming approach, and planned to work the route for two more days. Our tactic was to use all our climbing and aid climbing abilities before placing a bolt, and to rely on nuts and cams, pitons and beaks as long as possible, until we found no other way of continuing or we got too scared. Curious how this would work out, we started to work on what would become the crux pitches, taking several hours for each pitch to find our way through overhanginging, mostly closed features and at times loose rock. On day two we almost reached the huge diagonal ledge that splits the south face in two. At least, we thought we’d almost reached it, since we then retreated.

In October we finally found a stable weather window to return to our project. This time we decided to bivy in the woods below the face and take more time to hopefully finish our project. On reaching our highpoint, one more tricky A3 pitch and a beautiful slab with a balancy runout finally led us up to the big ledge, where we hoped to gain more insight into the upper section of the wall.

The obvious dihedral we had in mind turned out to be predominantly loose rock and hence following this would have been a bad choice. As a result we decided to continue up a grey pillar on the right, past climbing that was less steep than the previous pitches, but still on terrain that provided sparse, run-out gear.

After one slabby, technical pitch we arrived at the base of a nice 20-meter crack that went almost clean (1 piton). Another overhanging crack past tricky beak moves on a slab led to the last pitch, a pleasant slab with small cracks that took plenty of gear. After scrambling for a few more meters we finally reached the summit, just in time to make it back to our small basecamp before sunset. We were very happy to have finished this little adventure, one that is so close to home yet, at the same, time, one that felt so remote.

Overall, the route offers very varied climbing with interesting aid and free climbing up to A3 and VIII in between the protectable sections. We used 11 bolts overall for protection (5 of them in the crux pitch), several pitons and some beaks, equipping most of the belays with at least one bolt. Having fun with beaks, hooks and pitons is obligatory, since protection is often tricky to place and not always super solid, including those pitches where falls may be dangerous.

With its perfect triangle shape and its standalone position, the name of the route, Erebor, didn’t need discussing much. Unfortunately we didn’t get a chance to free all the pitches, but we hope to return as soon as conditions allow us to do so.