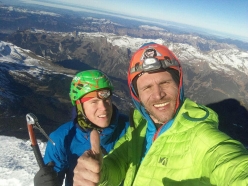 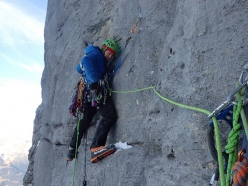 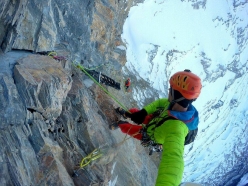 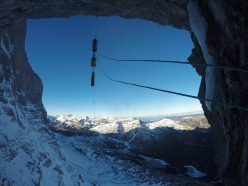 Mountaineering: from 29 November to 6 December 2016 Tom Ballard and Marcin Tomaszewski made the first ascent of 'Titanic' (A3/M5/6b, 1800m), a new climb up the North Face of the Eiger (Switzerland).

Britain’s Tom Ballard and Poland’s Marcin Tomaszewski have hit the jackpot once again: after their huge new route up Civetta in the Dolomites this summer, the two alpinists have now forged a new climb up one of the coldest and most inhospitable mountains in the Alps, the notorious and just as infamous North Face of the Eiger.

At present there are few details to go by, what we know however is that the two departed on 29 November with gear and food for 10 days on the mountain. After two days they had ascended the first 430m of their new route. The North Face, they commented on Facebook, is "huge, exposed, fragile" hence they were "climbing up very carefully".

After four days and just as many bivouacs they managed to climb 18 pitches, helped in part by the stable weather. And today, after seven days on the wall, they reached the summit having breached 1800m and difficulties estimated in the region of A3, M5 and 6b. The new route is called Titanic; naturally we expect to find out more in the near future.

In winter 2015/2016 Ballard became the first to solo climb, in the same winter season, the six great North Faces of the Alps: Cima Grande di Lavaredo, Pizzo Badile, Matterhorn, Grandes Jorasses, Petit Dru and the Eiger. Tomaszewski, in line with Poland’s tradition of not feeling the cold whatsoever, has an impressive curriculum with ascents to his name such as Katharsis on Trollveggen Troll Wall in Norway, Superbalance up Polar Sun Spire, Baffin Island, and Bushido on Great Trango Tower in Karakorum, Pakista. All three climbs were first ascended together with Marek Raganowicz.