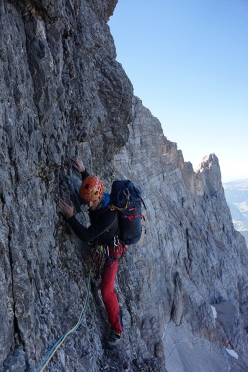 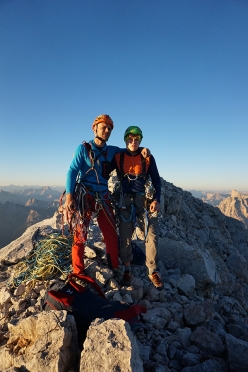 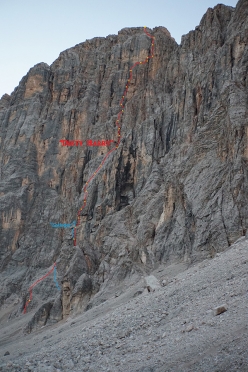 From 24 - 25 August 2016 the alpinists Tom Ballard and Marcin Tomaszewski made the first ascent of ‘Dirty Harry’ (VII, 1375m), a huge new rock climb up the NW Face of Civetta, Dolomites.

British alpinist Tom Ballard and his Polish counterpart Marcin Tomaszewski have climbed a new route up the NW Face of Civetta that Ballard describes succinctly as “a (mostly) new route we climbed over two days…” The route is called Dirty Harry, is 1375m high split up into 29 pitches, was climbed with a bivouac after the 12th pitch and breaches difficulties up to VII. Knowing the two first ascentionists, this route isn’t to be underestimated by any means. Furthermore, the portion of the face the route lies on is historically significant: the new route crosses low down and then runs to the right of the first grade VI climb in the Dolomites and Alps, the legendary Solleder climb put up on 7 August 1925 by German alpinists Gustav Lettenbauer and Emil Solleder.

We started from Val Corpassa at 3.30am and began climbing at 7.30am. The first pitch was a steep corner, easier ground then made us join the Solleder route. We then climbed the famous 'red flake’ and left the Solleder at this point with an exposed traverse right. We linked a series of chimneys and corners to reach easier ground at the left edge of the large snowfield, where we prepared our bivy. In the last of the evening sunlight I climbed one more pitch using 5 points of aid.

We start climb as soon as it was light. I freed the aid points, and then we continued up more chimney pitches. A nice 'wall' pitch got us established in a series of grey cracks, passing a blade-like rock formation. Marcin led a wet (but not slippery!) pitch and then belayed under the drips. I felt sorry for him as I slowly climbed a long pitch. Now a huge overhanging wall blocked our path, so we traversed rightwards to more chimneys and some old pitons. A few more pitches and finally we reached the top at 8pm!

We descended down the Via Ferrata Tissi. As soon as its flat enough we slipped into our sleeping bags and gazed at the stars.

I would say the route is very logical, linking up natural features in an 'Old School' way. We left only 6 pegs behind. The rock ranges from amazing to awful, with everything in between.

For a repeat you would need: a double set of Friends(#OO-#4), a full set Tricams, 6p egs (2 Corners, 2 Knifeblades, 1 Lost Arrow, 1 Universal). A large "Tomahawk" and smaller "Peckers" will be found very useful!

I would in particular like to thank CAMP/Cassin for setting me up with the Yeti (Marcin). And also his unquenchable passion for new routes!