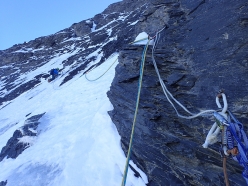 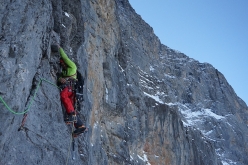 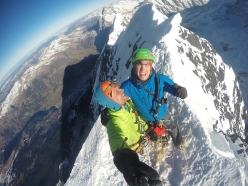 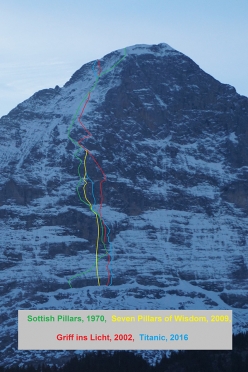 Interview with British alpinist Tom Ballard after the first ascent of ‘Titanic' (A3/M5/6b, 2000m), a new climb up the North Face of the Eiger (Switzerland), first ascended together with Marcin Tomaszewski from 29 November to 6 December 2016.

As reported last week, after climbing for seven continuous days Britain’s Tom Ballard and Poland’s Marcin Tomaszewski completed their 'Titanic', a difficult new rock, ice and mixed climb up North Pillars on the lefthand side of the North Face of the Eiger. The 2000m line starts immediately to the right of ‘Griff ins Licht’ (Peter Keller, Urs Odermatt 2002), and runs parallel to this to reach the First Pillar, before crossing the Swiss route, reaching the Second Pillar and then tackling 400m of virgin terrain up the Third Pillar. Due to poor rock Ballard and Tomaszewski were then forced to trend leftwards and join the route ‘Seven Pillars of Wisdom’ before continuing on to the summit. It’s worth noting that this is not Ballard's first new route on the Eiger: in 2009, when the mountain became his second home, it was he who made the first ascent of ‘Seven Pillars’ , aged a mere 20. It was during this solitary first ascent that he noticed what has now become Titanic.

Tom, how did this route with Marcin come about?


Whilst preparing for the first free ascent of the Scottish Pillars in 2009 I realised all the published topos in books/magazines etc. were incorrect, and this allowed me space to add a new 1000m rock climb all of my own, Seven Pillars of Wisdom! I also saw another line, and even bought a portaledge for this, but couldn’t find enough support for the ropes and other kit, so the line remained virgin. But always at the back of my mind! I later sold the ledge to pay for other projects… Some time after our Civetta success, Marcin and I both had the Eiger idea simultaneously; he suggested a line on the right which I dismissed as too unpleasant in ‘winter’ conditions, and I suggested my old dream instead... the rest is history!

So where does this new route go?
Our line starts only ten metres right of Griff ins Licht. The first pitch was 60m and pure rock, then 3 pitches of relatively easy snow/mixed led to a lovely pure water ice pitch! After a short snow pitch the "grey slabs" began, which were mostly covered with perfect ‘squeaky’ neve. Two pitches with short mixed sections and we arrived at very overhanging rock, the first pillar.

What was this like?
The rock quality was poor on the hardish aid pitch Marcin climbed next. Then I airily traversed left and above where the rock improved dramatically and protection diminished! A vague fault was followed for two pitches, first aid and then a very Scottish style mixed pitch, spindrift raining down and much digging in the snow for gear and placements! This was followed by easy angled snow and mixed (hard hauling!) to the base of the second pillar. Here we spent our 3rd and 4th nights on the face.

At this points four routes cross: Scottish Pillars (aka Solitaire), Seven Pillars of Wisdom, Titanic and the 1968 Polish Route
Yes. One long diagonal mixed pitch and we reached the base of an immense 400m high wall, the 3rd pillar. Two pitches with good rock, both aid and free climbing, led us to a natural fault line which turned out to have loose rock and large detached blocks just waiting to topple. Then our portaledge reached its highpoint after 20 pitches. What looked from below to be good rock now seemed dangerously loose, so we trended left and after 870m of independent climbing joined my 2009 route Seven Pillars of Wisdom. This we climbed (hard free climbing in winter boots on sloping holds!) for five pitches to reach the top of the 3rd pillar.

And from here?
We set off early and reached the summit at around 2pm on the 6th December. The Lauperschild was in very thin conditions. Then we made our descent, in 18 abseils we regained the top of the third pillar in what turned out to be a minor epic; crumbling rock, stuck ropes, cut ropes, old bolts falling out, desperately trying to find our footsteps in the dark…tired and thirsty we crawled into our portaledge at 20:30. The next day we retrieved our ropes from the third pillar and then abseiled down, 40 rappels in total!

How would you describe the ascent?
We followed a very natural line, we were led up it by the mountain. It offered interesting and varied climbing, and hard hauling!

How is the route protected?
We placed 24 bolts on the pitches and 26 at the belays. We had a power drill and this was invaluable. The bolts we used for descent on the Lauper face were all hand placed. I knew from experience that Eiger rock can at times be extremely blank and featureless, and other times offer superb cracks and slots! We left only a couple of pegs behind, such is the rock. Marcin placed loads of ‘iron hawks’ on his aid pitches and we wished we had had more ice screws on the upper section.

What style of ascent did you use? What was important for you guys?
What was important was getting to the top! I arrived in Interlaken with the train at midnight on the 28th November. Marcin had driven from Poland. We spent the night in the only free parking area in Grindelwald! The next morning we packed our gear into 4 heavy rucksacks and 2 haulbags and took the train to Alpiglen. Then we staggered up to the face in two stages, there was a pathetic amount of snow. We started to climb on the morning of the 30th, and reached the summit around 2pm on the 6th December. After our 8th portaledge night we abseiled down. I guess you call it capsule style.

This is your second really big route together, after Dirty Harry on the NW Face of Civetta in the Dolomites. Tell us about the Ballard - Tomaszewski partnership.
I know that he has a huge big wall repertoire from which to draw from. I have a large alpine experience, except mostly soloing and consequently I find it a little hard to adjust to working with someone else. I feel sorry for all my partners, I say virtually nothing! But I guess he knew this from Civetta so he was quite content to stay in silence! I provided all my Eiger ‘knowledge’ which is built upon more than 100 days spent on this enormous face. What we know is we both have the skills to cope with almost anything the route could have thrown at us!