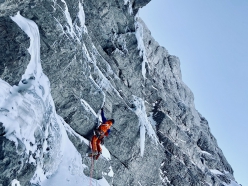 Dani Arnold establishing Egidius up the North Face of Gross Ruchen in Switzerland together with and Roger Schäli on 21/11/2020
Photo by Dani Arnold, Roger Schäli 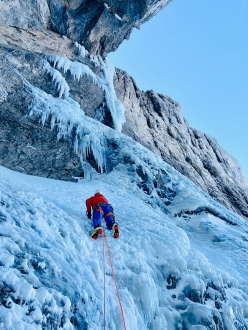 Roger Schäli making the first ascent of Egidius up the North Face of Gross Ruchen in Switzerland (21/11/2020)
Photo by Dani Arnold, Roger Schäli 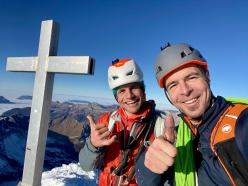 Roger Schäli and Dani Arnold on the summit of Gross Ruchen in Switzerland on 21/11/2020 after the first ascent of and establishing Egidius up the mountain's north face
Photo by Dani Arnold, Roger Schäli 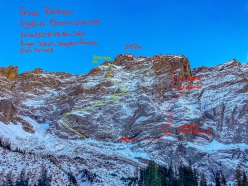 Swiss alpinists Dani Arnold and Roger Schäli have established Egidius, a new mixed climb on the north face of Gross Ruchen (3137m) in the Glarus Alps in Switzerland. Arnold had previously attempted the line with Stephan Ruoss in 2009.

Switzerland’s Brunnital is dominated by Gross Ruchen, the 3137m peak with its imposing north face up which on 28 November Dani Arnold and Roger Schäli completed Egidius. The new 1300m mixed route was climbed by the Swiss mountaineers past WI6+/M7+ difficulties. Arnold had attempted the line in 2009 with Stephan Ruoss but turned back at characteristic "Little Cathedral" cave at mid-height, and succeeded this year with Schäli after three days of preparation.

Writing to planetmountain.com, Arnold stated: "Egidius is a very logical line on the righthand side of Gross Ruchen’s north face. On the lower section it initially follows the Pucher route. The crux sections are located in the middle of the face; the "Little Cathedral" and "Big Cathedral" offer a few few pitches of varied and modern ice and mixed climbing, while the rest provides classic north face terrain.

Up to the "Big Cathedral" we placed a bolt at every belay, meaning that a retreat up to there is always possible. Nuts, cams, ice screws and a few pegs were used as pro on the pitches, while bolts protect some of the cruxes. The route varies greatly depending on the conditions. Patience, a lot of motivation and sufficient mountaineering skills will be needed for a repeat..."


Dani Arnold and Roger Schäli rank among the strongest alpinists in the world and, interestingly, this is only  the first time they have climbed a big mountain route together.

11.06.2015
Simon Gietl and Roger Schäli climb NE Ridge of Devil's Paw North Tower in Alaska
In mid-April 2015 Roger Schäli and Simon Gietl made an alpine style first ascent of the NE ridge of the North tower of Devils Paw, Alaska via their new route Black Roses.