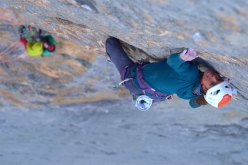 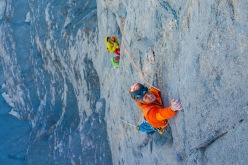 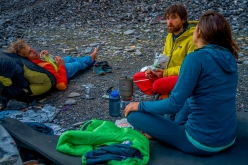 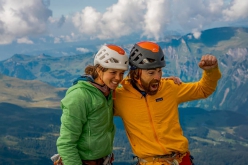 Last summer an all-star team of climbers comprised of Nina Caprez, Sean Villanueva and Roger Schäli established a difficult new rock climb up the North Face of the Eiger in Switzerland.

While Robert Jasper was making his rope-solo ascent of Meltdown on the Geneva Pillar of the Eiger, all-star climbers Nina Caprez, Sean Villanueva and Roger Schäli were busy nearby making the first ascent of Merci La Vie.

The new route was first ascended ground-up without the use of aid and although the eight pitches have not yet been climbed in a single day, the trio reckon this might well settle in as the most difficult rock climb up the North Face.

“It’s more adventurous than I thought it would be” stated Villanueva after the ascent “There’s some really good rock, but there’s also some bad rock and some big run outs. It’s got a special feel to it.”

This marks the end of in impressive season on the Eiger for the three climbers. Caprez made her Eiger debut with a repeat of La Vida es Silbar, Villanueva managed a very impressive flash of the very same route and Schaeli checked in his 50th ascent of the mountain. It goes without saying that the trio plan to return as soon as conditions allow them to in order to make the first free ascent.

03.09.2019
Roger Schaeli climbs the Eiger 50 times
Swiss mountaineer Roger Schäli has celebrated his 50th complete ascent of the Eiger in the Bernese Alps in Switzerland.