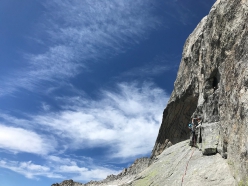 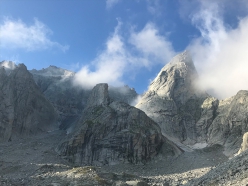 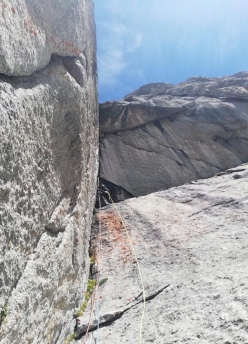 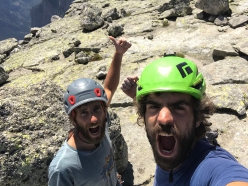 Punta Ferrario is one of those peaks in the Masino valley that’s never really taken into consideration. It’s too far, too steep, at least for me. I always viewed it with a mix of respect and awe, especially the central section of the wall, the steep part, crossed by two routes only: Via del centenario CAI, a perfect crack that cuts right through the righthand side of the yellow wall first ascended in 1963 by Vasco Taldo , Josve Aiazzi and Angelo Pizzocolo and, to its left, a huge corner capped by a finishing overhanging called Diretta dei Cecoslovacchi, established in 1980 by B. Ciernik, J. Hyuny, M. Marek and F. Piacek who climbed a straight, perfect line past severe VI A2 difficulties.

A few years ago Simone Pedeferri had managed to free parts of the pitches, first in summer and then in winter 2003 on his own, but not the exit of the overhanging corner which is often wet.

Ok, after this brief preamble which includes a few historical details from the past, let’s return to the present, to a Sunday afternoon a few weeks ago when I flicked through the Masino guidebook and, almost by chance, ended up reading about the Czechoslovakians. I decided I wanted to give it a go, on Tuesday and Wednesday I didn’t have any work commitments, but I also toyed with the idea of ​​climbing a ridge, perhaps a new one. Not bad I thought. I called Jack Regallo and he immediately said yes.

The evening before setting off though we changed our plans and decided to head up to Punta Ferrario. I don't know why, perhaps the ridge we had in mind seemed too long and tiring, or perhaps this time we were sure the upper corner on Czech route would finally be dry. Or, in truth, we just didn't want to get up so early the next day... too much work!

On Tuesday morning after breakfast in the van we were still at the bar at 9:00 am, having coffee, chatting. We sorted our gear and left at around 11. We walked calmly up to the Manzi bivouac, indeed, I’d never climbed up into Val Torrone so calmly before! We rested at “Hotel Meridiana” where we chatted with Luca Schiera for more than an hour.

In the early afternoon however, we were up below the peak; our aim was to get there and check out the wall, see if it was wet and, if necessary, think of something else to do. And what could the wall be like (apart from being completely soaked)? Covered in a thousand clouds, that didn’t enable us to catch a glimpse of the mountain apart from a few seconds at sunset. We could have slept more and left later after all…

The next morning the alarm clock rang early as usual, despite the fact that before eight we couldn’t start climbing because of the cold and the bags under our eyes. Jack set off first and we initially swung leads, making swift progress up to the corner since the grades were quite easy. The first VI pitch in the corner showed us how the Czechoslovakians graded: let's just say they weren’t particularly generous. Jack climbed the first hard pitch freed by Simonew, a layback, not the easiest to protect. Clean, on-sight. I seconded and things ran smoothly for me, too. We reached the pitch which still needed freeing and it was my turn to take the lead. I noticed it was almost dry but extremely steep and decide to rest for a moment while Jack smoked a cigarette.

I set off, some sections where wet but not too wet, above all though I was pumped stupid and unable to add any decent gear. I was faced with the age-old question: “stop and place gear” or “push on and pray”. Well, by sheer luck I freed the pitch onsight, having given little thought to stopping and placing pro. Giacomo seconded the pitch clean. We were super happy. A few pitches led us to the Taldo route, and from there we climbed another challenging pitch before reaching the top.

At 14:00 we are on the summit. At 21:00, having had to rig almost all the abseils, we were down in the village with a glass of beer in hand, overjoyed for having freed such a logical, straight and perfect line onsight.

18.03.2016
El Chaman Loco, new rock climb in Mexico by Maggioni, Marazzi and Pedeferri
In November 2015 Simone Pedeferri, Paolo Marazzi and Marco Maggioni made the first ascent of El Chaman Loco up the El Chaman face at El Salto, Mexico. Some pitches along this 400m climb still need to be freed, with difficulties estimated at 8c. The trip report by Paolo Marazzi.