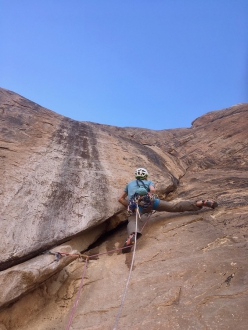 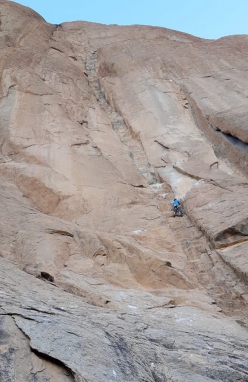 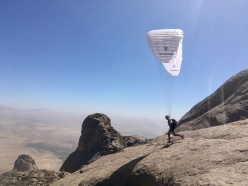 Climbing in Sudan, new routes in Taka mountains above Kassala

Chris Warner from Australia reports about a rock climbing trip to Kassala in western Sudan with Jonny Baker which resulted in a handful of new routes in the Taka Mountains,

In the West of Sudan there lies a great collection of granite domes with a few existing routes and plenty of potential for more first ascents of impressive lines. All the climbing is situated above the town of Kassala.

Jonny Baker and I arrived in Kassala on the 25 December 2019 for a 20 day stay. We spent the first day exploring the many domes for new and existing lines. Previous information was very patchy and confusing with regards to names and locations. The towers don’t appear to have individual names but are grouped under two names, Jebel Totil and Jebel Taka. We decided to give more descriptive names to each feature in reference to their location. From our research there has been very little activity. The first climbing was done in 1939 by some Brits to gain the main summit of Jebel Taka. Some Czechs visited in 1981 and put up a few routes, French came in 2003 and put up about 3 lines and two Americans did a new route in 2013. Then some Brits came over a few visits and established several shorter lines on the smaller rock features and did some bouldering.

Our first new route was up Middle Jebel on the north face. This is the only dome that you can walk up. We established the route Jebel Rebel, 6a+, 320m. The route was climbed ground-up and bolts were placed on lead. The route offers some great mixed climbing that gets only a few hours of morning sun.

We then went to climb the south face of Jebel Totil thinking we were doing a new route but found bolts on the second pitch. This was not surprising as it’s by far the easiest way to the summit. We climbed 3 pitches separated by some scrambling and made the summit in about two hours, we then rappelled the same line. The route gets full sun, so an early start is essential.

This route gave us access to the summit as we spied a dyke line on the west face we wished to climb. We then rap bolted and cleaned the dyke over 4 days. This line gives some amazing climbing on steep terrain on a continuous feature the whole way. The rock quality on the higher pitches was outstanding with interesting and fun climbing on positive holds. We named the route False Prophet, 7c, 340m. We then flew our paragliders from the summit back down and were greeted by hundreds of children from the small village we landed next to.

After this route we then climbed the existing routes, Khawadja on Jebel Taka North and the original route of Brown-Hodgkin 1939 on Jebel Taka. We flew again from both summits.

The last new route we established was on the North face of Jebel Totil. We named this route Bat Shit Crazy, 6c, 230m. This route was done ground-up with bolts placed on lead. It starts with several slab pitches to gain the higher crack system that leads to the summit. This route gave some nice climbing on varied terrain.

Kassala offers a great deal more new routes over the many towers. The hot temperatures make it very difficult to climb on the south faces but most of the best rock faces more to the north aspects. We were fortunate to get many days with temperatures in the mid-twenties giving pleasant conditions in the shade. There are many cracks, but most are discontinuous and would require linking together with bolts between. The faces are very featured granite and surprisingly solid to climb. We found the local people to be most friendly and helpful, they didn’t seem to be bothered by our climbing on the rocks but were naturally puzzled as to why we had come so far to do this.

17.09.2014
Bilibino big walls climbed by Australians in Russia
This summer Australian climbers Chris Fitzgerald and Chris Warner, acting on a photo taken by a Russian friend, travelled to the remote Bilibino area in eastern Russia where they made the first ascent of 6 new routes on what they believe are 4 previously virgin peaks. The report by Chris Warner.