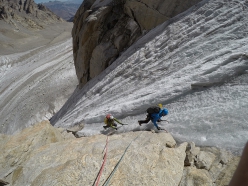 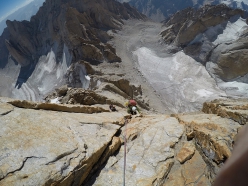 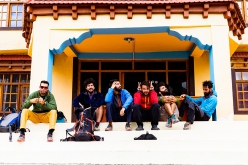 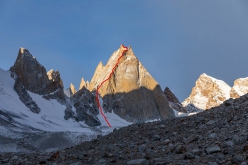 At the end of August 2018 Davide Limongi, Federico Martinelli, Enrico Mosetti, Federico Secchi and Luca Vallata climbed the East Ridge of Chareze Ri North in the Rangtik valley in the Zanskar area of India. Climbed alpine style with one bivouac, Jullay Temù (1000m, 70° ice, V + rock) reaches the north summit at5950m. Due to the onset of darkness and subsequent bad weather the main summit was not reached. Luca Vallata reports

From mid-August for about a month, our group of climbers from the regions Lombardy, Friuli and Veneto explored the Rangtik valley, a side valley of Zanskar valley in the Indian region of Ladakh.

Our expedition was based on an extremely useful report published by Matija Jošt in the American Alpine Journal, and our main objective was to climb a virgin, unnamed 6080m peak located at the valley head

After the first acclimatisation phase and after having evaluated the possible lines of ascent, our group used the first weather window to climb the obvious ridge on the lefthand side of the the NE Face.

The ascent was carried out over two days, first up ice (max 70°), then past top quality rock (max V+) that led to the north summit at circa 5959m.

We attempted to reach the main summit and find a better descent route and therefore followed a very sharp ridge to the top of a tower, circa 200 meters as the crow flies from the 6080m main summit. At this point though darkness set in and we had to retreat down the NW Face, via an
adventurous series of rappels in the dark.

Bad weather set prevailed during the second half of our stay in Zanskar and this prevented further attempts at reaching the main summit, which therefore remains unclimbed.

A bit of toponymy: our climb is called Jullay Temù, or hello bear in Ladakhi, in order to greet the discrete family of Himalayan bears who visited the valley during our stay, leaving footprints and making suspicious noises at night ...

Our cook Sonam and his aide Lobsang would like to baptise the mountain Chareze Ri as, they explained, Chareze is a type of stupa that resembles our summit.

01.01.2018
New Austrian Climbs in Indian Himalaya
The Austrian Alpine Club cadet team 'Naturfreunde' celebrated the end of the 2015-2017 triennial with a successful mountaineering expedition to the Zanskar region in India that results in new climbs in the Indian Himalaya.