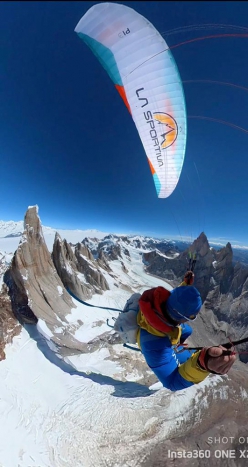 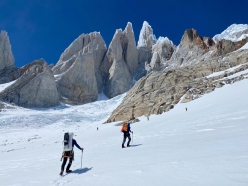 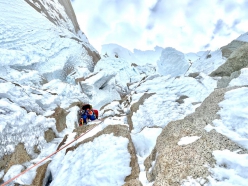 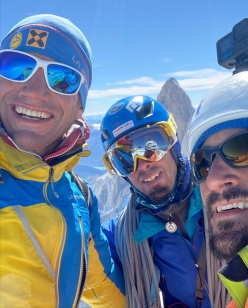 Roger Schäli, Pablo Pontoriero and Mario Heller on the summit of Cerro Torre, Patagonia on18/01/2022
Photo by Roger Schäli

On 18/01/2022 Roger Schäli, Mario Heller and Pablo Pontoriero paraglided off the summit of Cerro Torre in Patagonia after having climbed the West Face Ragni route.

Following in the footsteps of Fabian Buhl who in 2020 paraglided off the summit of Cerro Torre, on 19/01/2022 Swiss mountaineers Roger Schäli and Mario Heller and Argentina's Pablo Pontoriero took the fast route back to El Chalten, too.

Schäli has been in Patagonia for a few weeks and in the run-up to Christmas he summited peaks such as Guillaumet via the Comesana - Fonrouge Route, Poincenot via the Whillans - Cochrane route and Fitz Roy via the Afanassieff route with Bettina Gruber. Mario Heller arrived on New Year's Day and after contracting and then recovering from Covid, the pair teamed up with Pablo Pontoriero in order to climb Cerro Torre.

The mountain has already been ascended this season, notably by Vittorio Messini, Gabriel Tschurtschenthaler and Matthias Wurzer who were the first to negotiate the famous summit mushroom on 16/12/2021. Heller, Pontoriero and Schäli joined forces with five Argentine friends, Agustín Mailing, Pedro Fina, Luciano Cortez, Sebastián Beltrame and Ramiro Greco.

The group made steady progress up the West Face Ragni route but due to "unexpectedly demanding" conditions they were forced to bivuoac one pitch below the summit late on 18 January. The next day Mailing climbed the challenging rime ice that led to the summit and the others followed for the ritual photos; this was Schäli's third ascent of the mountain after climbing the Compressor Route in 2006 and the SE Ridge in 2016, but by his own admission "I had never been so tense and nervous during the whole climb."

The reason for this was the fact that the trio planned to paraglide off the summit and, in nigh perfect conditions, they took off at midday on the 18th of Janaury, landing close to El Chalten a few minutes later. While Pontoriero flew with a single skin by AirDesign, Heller and Schäli flew with Advance Pi3 paragliders that weigh circa 1.8kg each; the alpinists flew with all their climbing gear except for Schäli's helmet which he had given to one of the Argentines who had dropped his during the ascent.

Schäli told planetmountain "Climbing Cerro Torre this time round I was more nervous than I have been for a long long time before a big mountain route, because I knew that climbing the Torre would have been only half the challenge. I always knew that after the summit I'd have to deal with the take-off, and this once again requires 100% concentration. What makes it so hard is the fact that you have to ignore the fact that after raising the wing and running forward for 5 - 10 steps, all of a sudden you've got a 1000-meter void below you! So when you decide to go, you've got to commit 100%. Aborting can be even more dangerous and you risk falling off the headwall!

In the end the start was actually OK, despite the fact that the wind was really weak. But I knew from experience that up on the exposed summit the wind blows from all directions, so it was just a question of being patient and waiting for conditions to be right.

The flight really was a dream come true and now I'm just megaaaa relieved. It was only a lot later on, a long time after the landing, that I really realised what I'd just done.

Many thanks to Mario and Pablo, the two paragliding professionals, for their help at take off. To Fabian Buhl for the tips & tricks. To Rolando Garibotti, Vittorio Messini, Tomás Roy Aguiló and Karl Gabl for weather reports and much more! And of course to our Argentine friends Agustín Mailing, Pedro Fina, Luciano Cortez, Sebastián Beltrame and Ramiro Greco. These are the moments I live for!"

03.09.2019
Roger Schaeli climbs the Eiger 50 times
Swiss mountaineer Roger Schäli has celebrated his 50th complete ascent of the Eiger in the Bernese Alps in Switzerland.