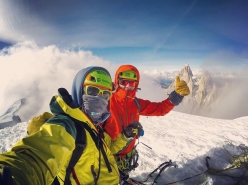 Vlad Capusan and Zsolt Török on the summit of Cerro Adela Sur in Patagonia, January 2018, after having established a variation to Filo Este
Photo by archive Vlad Capusan 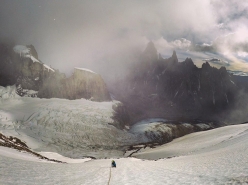 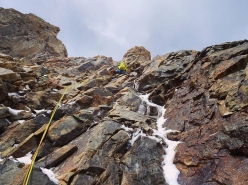 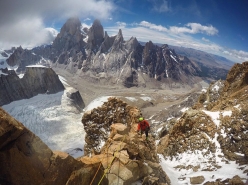 Romanian mountaineers Vlad Capusan and Zsolt Török have added a new variation to Filo Este on Cerro Adela Sur in Patagonia. The logical new line was climbed in 34 hours.

In mid-January the Romanians Vlad Capusan and Zsolt Török established a new variation to the climb Filo Est up Cerro Adela Sur, the 2800 m high peak in Patagonia first ascended in February 1958 by Walter Bonatti and Carlo Mauri during their memorable traverse of the massif.

Capusan and Zolt climbed Filo Est, established by Argentines Jorge Aikes, Nestor Monaco and Omar Pellegrini in 1967, before following what they have described as a "logical line through the NE Face at the beginning of the ridge."

Capusan told planetmountain.com "We only found out later that this wall was totally unexplored. This climb had everything, mixed, ice and some charming Patagonian ridges. We climbed some easy ice chimneys until the headwall where we joined a beautiful iced crack with some intense mixed sections for 6 pitches. We exited onto the main ridge when the weather started to change. The rock was good quality but cold conditions always help, especially for the ice. We managed to reach the summit after 17 hour push. During the descent the wind started to blow wildly so we made an epic bivi on the ridge. The next day we descended in poor conditions onto the Adela Glaciers where we played Russian Roulette through the sercas. We rated the climb M5+/WI4, our round trip from the Niponino camp took us 34 hours in total, with a 7 hour bivi."