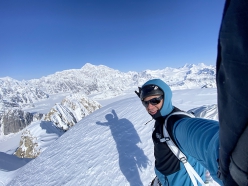 Benjamin Lieber on the summit of Moose's Tooth in Alaska on 14/04/2022, after having soloed Ham & Eggs Couloir
Photo by Benjamin Lieber 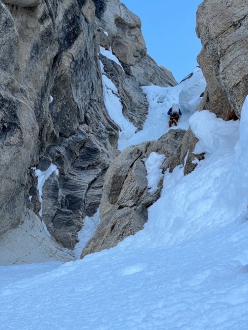 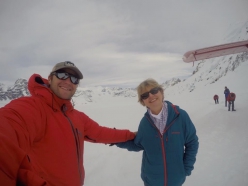 On 14/04/2022 American alpinist Benjamin Lieber has made a solo ascent of Moose's Tooth in Alaska, via the classic Ham & Eggs Couloir

American alpinist Benjamin Lieber has made a fast solo ascent of Moose's Tooth, the stunning peak in Alaska's Denali National Park first ascended over a period of 12 days in 1964 via the West Ridge by the German mountaineers Klaus Bierl, Arnold Hasenkopf, Alfons Reichegger and Walter Welsch. Just five days after reaching base camp, on 14 April 27-year-old Lieber soloed the mountain via the classic Ham and Eggs route, established on the South Face in 1975 by Thomas Davies, Jon Krakauer and Nate Zinsser. Lieber needed a mere 3.5 hours to reach the 3150m summit, and descended in a further 2.5 hours.

Ben, tell us more about this mountain
The Moose’s Tooth is an iconic and striking mountain. I first heard of it before I’d ever visited Alaska. When I finally did in 2016 with my mother, it was the first big mountain I can remember seeing. At that time I’d never seen anything like the Central Alaska Range before. It was a beautiful peak at first sight and special to have seen it while with my mother.

Before this solo, had you climbed the mountain before?
I’d actually never been to the Moose’s Tooth, no, but have been on many trips in the Alaska Range.

You grew up in New Hampshire, but now live in Alaska
Yes, I actually live a couple hours drive from Talkeetna where bush planes on skis offer quick access to the remote Central Alaska Range. So I packed in a couple hours and drove North, hopped in the plane shortly after arriving, and not long after I was standing on the Root Canal Glacier below the Couloir.

At Basecamp
Basecamp was a wonderful place. Towering granite walls, made up the immediate area and beyond views of the great peaks of the range lay out in a postcard landscape: the Ruth Gorge, Mt Huntington, Begguya (Mt Hunter), Sultana (Mt Foraker), and of course Denali. I had a really basic camp, just my one tent and dry foods. Very different from the common luxurious basecamps seen in the range. The weather was amazing every day and barely a cloud passed by for the 5 days I spent at the Root Canal.

The route you chose was Ham & Eggs Couloir
It's an ultra classic route that has seen many ascents and is a dream to climb for many North American climbers. I’d heard of the route a long time ago but when I first saw it, it was out of my league at the time and something I aspired towards. Eventually I became experienced enough but I went on other trips in the Alaska Range and never actually visited the Moose’s Tooth. The route has been soloed at least a few times before me, I’m not sure how many, but that added some confidence it would be a pretty fun solo mission.

Have you done much big soloing before?
This was my first solo in the Alaska Range. Soloing in the big mountains is something I have been working towards. After a really productive winter of cragging, I felt the time was right and decided to fly in.

Tell us about the ascent
The climb was in about as good of condition as I could imagine. Previous parties had been turned back by deep snow a week earlier. The day before I climbed, two parties of two made it to the summit, this undoubtedly made it safer for me. Snow conditions were excellent and the ice climbing was good enough. The ice pitches weren’t overly difficult but the ice was airy and felt rotten and insecure, it took some good focus to get through them without the rope on. I thought the route was about what I had expected in difficulty and a comfortable level for me soloing.

Tell us about the experience on the top
The summit ridge is a long & rising cornice which hangs to the North, the route comes up from the South and meets the ridge at a col. Low wind, bright sun, a perfect morning - just one lone figure on the ridge. I had always dreamed of experiencing something like this in my life. My view was no longer looking upward, now I looked out to the East across waves of the corniced top which rose gently to the true summit. Walking along the final ridge, I followed the narrow track of the others from the previous day and placed one foot in front of the other as if walking on a tree over a creek. I looked out at the seemingly endless mountains of Alaska that surrounded me. Denali, Hunter, Huntington, Foraker to the west, Silverthrone to the north. I stepped onto the summit and below was the Ruth Gorge, in the distance the Sleeping Lady near Anchorage, behind me now the tracks from which I followed up. This wildly glaciated land surrounded me on all sides from my corniced perch and it was as if I was now a part of the wilderness too. For a moment I felt larger than the mountain itself, but ultimately I felt small and insignificant - just a single creature atop a lifeless tooth of granite & ice.

How did you descend?
I didn’t stay on the summit long and descended the summit ridge by mostly downclimbing and some walking, with one or two rappels to get back to the Col. From there it was 15-18 rappels with the two 60m ropes I brought up.

How big is a step is this in your climbing compared to previous ascents? What led up to this?
I had a productive winter of cragging that set me up for the climb. This is a proud achievement for me because it’s a solo ascent of an ultra classic Alaska Range route. It opens the door for more solo opportunities in the Greater Ranges that are at a higher level than this one. This was a while coming for me and I’m happy it worked out.