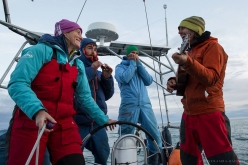 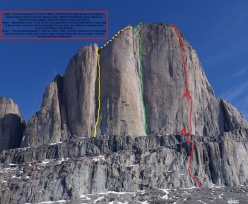 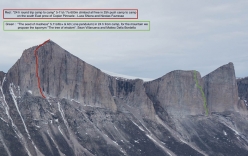 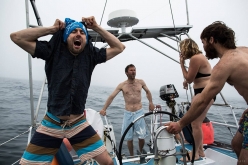 The final report by Nicolas Favresse about the recent two-month climbing trip to Baffin Island, together with Sean Villanueva, Matteo Della Bordella, Matteo De Zaiacomo and Luca Schiera that resulted in a series of new, long and difficult trad routes.

We have just reached "civilisation" and are slowly reconnecting to the rest of the world which we had left about 2 and a half months ago! Never have I enjoyed so much walking bare foot, smelling the trees, tasting fresh fruits and vegetables and savoring every little bit of comfort which we are so lucky to have. Having said that, it’s pretty overwhelming to get back into the spiral of our consumer society.

A couple of weeks ago the sight of the Maewan sailboat anchored in Sam Ford Fjord right by our stash seemed like a mirage. We hadn’t seen anything that civilised in a long time! The Maewan base is a project initiated by Erwan Le Lann, that provides a base for sport adventurers to approach unexplored playgrounds. With a teardrop in our eye, a good stock of fresh salmon and stinky socks we said goodbye to the place we had called home for the past 2 months and sailed away exactly where we had skied a couple months before.

Weaving through drifting bits of pack ice in dense mist we had to double our concentration while following the Baffin coast northwards. But here and there the mist cleared up and the sight of huge glaciers and mountains was a great spectacle! Passing Bylot Island we reached 74 degree north - the most northern point of the Northwest passage - and took advantage of this new latitude record to get a true feeling of the Arctic by having the whole crew jump in.

One of the most exciting moments of the journey was when the Maewan got stuck by drifting plates of pack ice because we were too busy watching polar bears. Without Captain Reverend Bob Shepton on board and his Moses trick to cut trough the ice, the only way to break free was to step out on the ice to push and pull the boat as it had to convert itself into an icebreaker. Other exciting moments include being charged by a fat walrus while trying to approach it in the pack raft, sailing into what looked like nothing when the sea was so flat and the sky clear blue, and seeing a simultaneous sunset and moonset on the sea!

After almost 3 weeks of sailing, we finally reached Cambridge Bay, marking the half way point of the Northwest passage. Meanwhile our three Italian friends had successfully survived and reached Clyde River. It was the end of the wildest expedition we have ever done!

We gave our place on the Maewan to a new crew who kept sailing west towards Alaska, in search of other playgrounds. Good luck guys!!

We would like to thank all our partners that contributed to making this adventure happen : Patagonia, The Belgian alpine club, Lyofood, Alpacka raft, Julbo, Threshold provision, Maewan base, Black Diamond, Petzl, Sterling ropes, Five Ten, Seeonee, Cap expe and Jody and Laura who opened their home to our mess in Ottawa.

Thank you for following our adventures;-)


All the climbs were done without the use of bolts


Down the slope without a ski

Walker Citadel North West Face, in the Walker arm
5.12a/7a+ 1000m climbed in a 32h push camp to camp. Sean Villanueva, Nicolas Favresse, Luca Schiera. The team descended via a snow couloir on the south side of Walker Citadel.

Mascalzone Latino
5.12b/7b & A0 (one pendulum on the last pitch) 600m + easy ridge to the summit,in 24 hours from the big ledge, the crux pitch was climbed on redpoint. Luca Schiera and Matteo Della Bordella

The Northwest passage
Great Sail peak, Stewart valley
5.12a/7a+ 700m + 350m (first part) climbed from the big ledge after the first part in a 36 h push camp to camp.Nicolas Favresse and Sean Villanueva
We don’t get many opportunity put up such perfect route in a life time. It’s defenitly a king line" said the team. The route climbs mostly Yosemite style perfect continuous clean cracks. 100m short from the summit Sean and Nico got caught by bad weather and were forced to improvise a bivy in order to wait for better free climbing conditions. After about 8h of shivering fortunately their patience paid off and the sunshine came back allowing them to freeclimb the last crucial link of the free ascent: a 30m unprotectable slab!

The seed of madness
The tree of wisdom
5.11c/6c+ & A0 (one pendulum) in 24 h from camp, for the mountain we propose the toponym "The tree of wisdom". Sean Villanueva and Matteo Della Bordella

24 h round trip camp to camp
East prow of Copier Pinnacle
5-11d / 7a 600m climbed all free in 25h push camp to camp on the south. Luca Schiera and Nicolas Favresse.

Catacomb
Citadel, Stewart Valley
5.12a OW 900m climbed all free in a 32 h push camp to camp on the very right end of the Citadel, Stewart Valley - Sean Villanueva and Nicolas Favresse. This line follows a dihedral just left of the route Arctic monkeys. Our original plan was to climb where the route Arctic monkeys goes but once we reached the base of the wall we were turned off by lots of ropes hanging on it. So we chose to climb the dihedral system on the left which turned out to be a feast of wet and mossy slots, chimney and Offwidths! A masterpiece for any wide crack addict with a slight love for masochism. The team descended walking on the back side and around via a glacier.