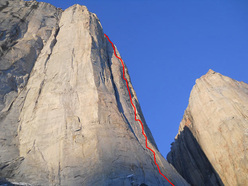 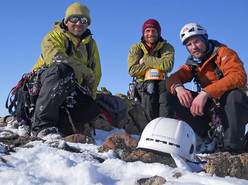 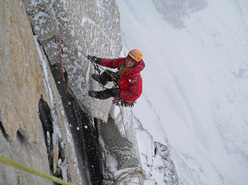 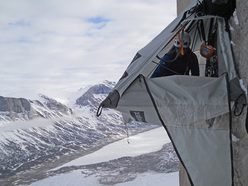 The trio reached the base of the mountain at the start of May and spent three weeks forging a line which Turner had spotted during a previous expedition back in 1999.

Climbing capsule style, they spent 18 consecutive nights in portaledges on the wall and encountered difficulties up to A4 on the 1400m line. Furthermore, they were severely put to the test by poor weather and cold conditions (which dropped down to -20°C) prompting Turner to comment "The cold made life harsh all the time. Belaying was the hardest thing to do, often requiring you to wear two duvets."

Despite running out of food the trio persevered and topped out on 24 May in perfect conditions, before abseiling off rapidly and returning to civilisation to escape the thawing fjord. McAleese described the experience as "... the most difficult, but rewarding climb any of us have ever done, and my word, are we looking forward to a few beers!”

Turner, a leading figure in Welsh climbing for the last two decades and with more than 20 major expeditions under his belt, described the line as being “like two Lotus Flowers staked up.” With an introduction like this, it was imperative that we'd find out more.

Mike, you spotted this line back in 1999. A dream come true?
Yes, it is certainly one of those lines that was always in the back of my mind to climb. Amazingly very few folk have ventured into the Stewart valley which I believe is possibly the best area for huge unclimbed quality walls in the world.

This was a very small, low-key expedition...
Small is the way forward. Large teams are not what its about in my books. The environment gets spoilt and the experience gets destroyed. Go on a beach holiday to Benidorm if you can only climb with lots of folk!

Can you describe the Arctic monkeys experience in simple terms?
3 mates on an adventure in the cold! Where the fun outweighed the suffering (only just) We felt like 'Brass Monkeys' at times and there was certainly times when you 'See no evil, hear no evil and spoke no evil'.

Tell us about the style of ascent?
Capsule style and mostly aid. Its pretty dam hard climbing and the cold makes its impossible really to free climb. It was minus 20 and below each day and unlike my last trip we had quite a bit of wind, brrr.

What about the gear?
Lots of trad gear, 3 full sets of cams, 4 sets of wires, beaks, pegs. We occasionally placed some bolts on belays and for the hanging portaledges. Furthermore, we had two sections of blank rock to rivet. The in-situ gear left ton the route are the belays and one rope which we couldn't get back.

Tell us about the greatest difficulties you encountered
The cold, getting up each day, hard aid sections , dealing with loose rock, mentally keep going, Stuart's snoring, plus the physical effort of 20 days climbing.

You ran out of food on your summit push
Yes, the second to last day with very little or no grub and we pushed hard in some bad weather. But it wasn't going to happen and we returned to the ledges. If the weather had gone bad we would have been in trouble as we were out of food and very low on fuel. The next day was perfect, our first good day. Clear, warm in the sun stunning views. Justice!

How "out there" did it feel?
It's remote but we trusted our Inuit Friends to pull us out if we had a problem. The real issue with this area is the fact that the sea ice can break up, then you are stuck till mid-August! It's a long way and pretty impossible to walk out once the ice breaks up.

You've been to the Arctic seven times before? What keeps bringing you back?
The area is unspoilt by man, endless sun, remoteness, exploring new areas and climbs. To live in such a place is incredible. The Inuit are the hardest and friendliest folk on the planet. They are the real heroes.

Have things changed since you first went there?
Not much on the face of it. Less climbers go. Sea ice breaks up earlier. We even heard an interesting storey due to warmer climates that the Grizzly and Polar Bear populations are meeting more often. Cross breeds have been seen!

What's important in your climbs?
The location, partnerships of team, strong line, the adventure aspect and most of all have some fun.

Your experience in the Greater Ranges is second-to-none. Can you share some of your fondest memories?
Every trip has been fantastic. Mostly the environment and people make the trips. Climbing in Patagonia's Torres Del Paine on Caveman (ED 700M E5 A2, 2 days alpine style) in 1989, Louise's and my first new big route, climbing in Mali with Salvador Campalio, meeting a climber Alfrado (Tarzan) in Venezuela, making the second ascent of the big wall Moby Dick (1000m) a big wall on Geenland's Ulamatorsoq in a day, almost getting avalanched in Pakistan and surviving, summits in Torres Del Paine, big nights drinking in the Fairview in Talkeetna in Alaska! Being on a FHM shot in Borneo! Mostly having fun though, they are just holidays after all. As my Mum says once you have seen one mountain you have seen them all!