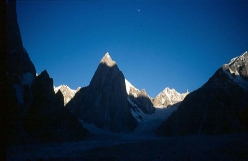 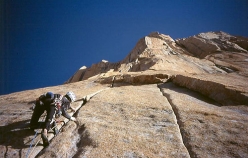 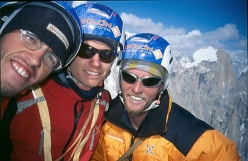 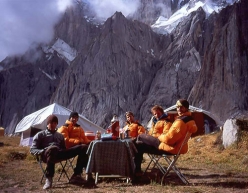 The team in base camp.
Photo by Austrian Shipton Expedition

Furthermore, the Tyroleans repeated a string of existing routes, including above all the first repeat, not completely free, of "Woman and Chalk" on the Shipton Spire. As many will remember, this line was first ascended by the Italians Mauro Bubu Bole (on-sight), Mario Cortese and Fabio Dandri in summer 2001. The team established fixed ropes in the lower section and then carried out an alpine-style rush to the summit. Here's their story of the long-awaited first repeat and their impressions about the route.

"Woman and Chalk"
The route ascends the central section of the 1200m high East Face of Shipton Spire. The route follows a long system of cracks and corners. The start is at circa 4250m. The lower section is characterised by cracks and corners. After 14 pitches you reach the "Bed and Breakfast", a small platform just about big enough for two portaledges. This is followed by the three hardest and most beautiful pitches. Difficulties ease off considerably in the upper section. Bubu Bole terminated his route on the crest. From here you can continue for 8 pitches (predominantly mixed) up "Ship of Fools" to the summit. The rock quality in the lower section isn't ideal.

Ascent
Thomas and Hansjörg swung leads. Ambros fought his way up with the haulbag. The 3 climbers used a combination of fixed rope and alpine style to reach the summit.

Route and grade
We have to congratulate Bubu Bole for his performance on the Shipton Spire. To climb such a route with such an uncompromising line from the ground up in 13 days commands respect. In particular, since he on-sighted all the pitches. Almost all belays are equipped with two bolts, there are some in-situ pegs along the route.
Repeating the route in complete alpine style may prove difficult as there are no good bivvy sites in the lower section. Furthermore, water supply is a relatively difficult issue.

We didn't have perfect conditions. Some sections were wet or iced over, which meant that we climbed all sections except for a few free. As all know, recently there has been a true "grade battle" - all use superlatives in search of attention. I reckon that only those who have repeated a route in exactly the same style (in this case all pitches on-sight) has the privilege of downgrading a route.

Personally I reckon that the grading on a couple of pitches is too high, although grading is always very subjective. I'm no specialist at crack climbing but I feel that the grade 8a for the crux is overrated. Let's not forget though that many other factors come into play in an alpine environment, such as the route conditions, the weather or the intended climbing style. And i need to add that many pitches were graded perfectly: I remember for example a demanding long run-out on a 7c pitch...

Trango Peak (6545m):
Presumably first ascent of this summit via the 2300m high West Face. Matthias Auer and Karl Dung in one day from Shipton Base Camp.
Grade: M5, ice up to 55°.

Shipton Spire (ca. 5700m):
First repeat of "Woman and Chalk" in the 1200m high East Face in 5 climbing days at the ands of Thomas Scheiber, Hansjörg Auer and Ambros Sailer. First complete ascent to summit.
Grade: up to 8a (according to first ascentionist), ice up to 90°, 36 pitches.

Nameless Tower (6239m)
"Eternal Flame" alpine style in two days from Trango Base Camp and in 8 hours from sunterrace to summit. Thomas Scheiber and Hansjörg Auer
Length: 800m. Grade: up to 7c+ (7b, A2), 28 pitches.

01.10.2001
Mauro Bole climbs Women and chalk on Shipton Spire East Face, Trango, Pakistan
From 26/07/2001 to 15/08/2001 by Mauro Bubu Bole made the first ascent of Women and chalk up the East Face of Shipton Spire (5850 m), a spectacular granite tower in the Trango valley, Pakistan. The three-man expedition consisted of Mauro Bole, his climbing partner Mario Cortese and the photographer/cameraman Fabio Dandri.