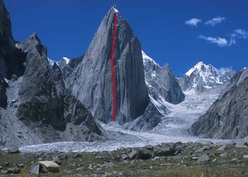 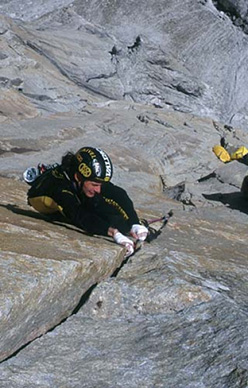 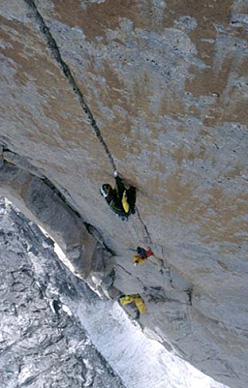 From 26/07/2001 to 15/08/2001 by Mauro Bubu Bole made the first ascent of Women and chalk up the East Face of Shipton Spire (5850 m), a spectacular granite tower in the Trango valley, Pakistan. The three-man expedition consisted of Mauro Bole, his climbing partner Mario Cortese and the photographer/cameraman Fabio Dandri.

"Why like this? I honestly find it difficult to explain to myself where "Women and Chalk" came from. Not even my (already fervid) imagination could have come up with something like this. Although before leaving I was convinced of being able to climb and free a new line, to on-sight it all… no, I never expected this.

I knew that nothing is certain on a wall such as this one. Even the slightest mishap can dash all hopes of success: the weather, the acclimatising, not to mention the danger of loose rock. But if I believe in something I always give it everything I’ve got...

I managed to climb just one hard pitch a day before losing concentration. I became suddenly aware of this on an easy section at about half-height: distracted, I pulled loose a small pillar… ripping out all the gear as I fell (and yet the placements were so good before) those 15m, head-first, seemingly never came to an end. Why was I falling so far if my last piece of gear was just beneath my feet? Just as I checked my harness to see if I was still tied in the impact flipped me upright again. The belay, thankfully consisting of two bolts, had held my fall!

The outcome was just a few minor scrapes, but my stomach was a complete mess. After having prussiked back to the belay my first thought turned to completing the pitch immediately, otherwise I would have returned home. So I started up once more, along a different line so as not to blow the on-sight and also because the first line, evidently, hadn’t been the right one. I was shaken. This was my first-ever fall in the mountains. And, once again, I realised how important it is never to lose concentration.

Concentration also means decisiveness. Like during the hardest pitch, when I realised the crux was still to come. After about 25 meters the thin, slightly overhanging crack suddenly flared wide open. I couldn’t continue hand-jamming, nor could I place any more gear. With eyes bulging and my last friend way below (as I didn’t have many that size) I decided to go for it. Also because, had I stopped, I probably wouldn’t have been able to redpoint that pitch. So I fought my way up, pinching the crack’s rounded edge, grunting and groaning, almost dynoing from one hold to the next to a good belay 5 meters higher.

"Women and Chalk"… for all those things that stand between the two. Perhaps the name isn’t very serious, professional, good enough for the route but it’s the first that sprung to mind and the only one that truly suits this unique, emotion-packed adventure. I really gave it all but after this experience I reckon that, given the right wall, motivation and imagination, one can go a step further still.

I owe a special thanks to my two climbing companions, for without them this dream wouldn’t have come true. We weren’t a "team" but instead a simple group of friends, and everyone did the best they could. This is perhaps the reason why things finished as well as they did."

Route description:
Continuous and logical series of cracks and corners that take an obvious vertical line from the summit of Shipton Spire. 1150m long, it climbs the magnificent vertical and overhanging granite wall to the crest beneath the summit, where it joins up with the 1997 American "Nef des Fous".

Getting there
Islamabad – Skardu - Thongul (bus + jeep) , the small village that acts as the starting point for all trekking in the Baltoro region. A 2 day trek leads to Paiyu, another day leads across a glacial moraine to Shipton Spire BC, a beautiful grassy triangle that manages to survive the onslaught of the glacier nearby.

The video
The video and trailer of the expedition is produced by Barcode Films c/o Superstudio_Trieste Via Milano, Italy