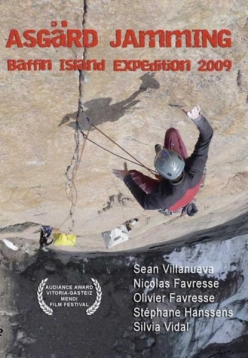 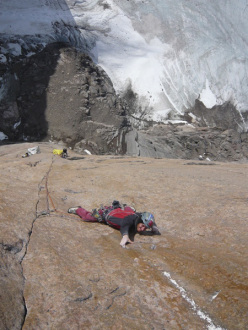 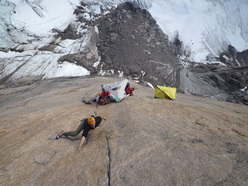 The wall was really sustained with a bunch of hard pitch on top of each other. Here Steph take his turn to try to redpoint pitch 5.
Photo by Nicolas Favresse 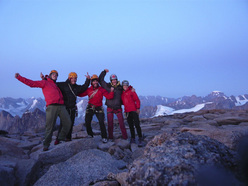 There are travels, exploration, beauty and adventure in Asgard Jamming. And there’s also a form of rock climbing that unites, the one you share because it provides joy and happiness. In short, there’s that unmistakable style, as fun as it is intelligent and, quite rightly, irreverent, put on display by the tried-and-tested group of Belgian alpinists composed of the Favresse brothers and Sean Villanueva, joined for the occasion by the boundless sympathy of their fellow countryman Stéphane Hanssens and by the tenacity of Spain’s Silvia Vidal, a true master of big wall aid climbing.

The stage is set by Mount Asgard on Baffin Island, deep in the Canadian Arctic, with its two stunning, smooth granite towers that need to be adventurously "improvised". Above all though there’s the journey, experienced intensely and fully, a full month’s march and 11 days on the wall. The entire undertaking is displayed, filmed, accompanied by music, climbed and commented live, right as it unfolds. Because this is a true climbing film, without any filters or cues. A film that engages the viewers, that renders you a part of that team spirit, making you feel - dream rathe - of being there with these crazy, fun and talented protagonists.

Hence there is no need for a voiceover to explain what is already blindingly obvious. Comprehending the effort needed to transport and haul the gear is child’s play. You literally experience the difficulty of the actual climbing. You don’t need to know that over there, up in the Arctic, there’s no such thing as night because the sun never sets. And there’s no need to search for a soundtrack, because these climbers are also musicians and their jam sessions - with mandolins and anything else that makes a noise - are as important as the ascent itself. Indeed, the accompany the whole climb. And at this point one could also add that there’s no need to even explain why they do it: the images more than suffice. Including the footage of that enormous, legendary lob Nicolas Favresse takes and relives on his portaledge the next day. Nicolas says: "I dreamt that move 50 times, and 50 times I fell…".

Those 11 days of wall, spent attempting the first free ascent of the Bavarian route up the South Tower of Mount Asgard, are a masterpiece not only of climbing but above all of the spirit with which one can experience rock climbing. Even when it is very difficult. Even when conditions are extremely harsh. Because it is not only about how hard something is, about the final grade. And you do not need to follow in the footsteps of these great climbers to experience the meaning and beauty of climbing. Asgard Jamming teaches us just this: a happy and intelligent style, prepared and conscious, of rock climbing is possible. And when talking about happiness, what springs to mind is the final scene of the film, on the summit: a true fleeting glimpse of sincere beauty.

GUARDA ASGARD JAMMING FREE OF CHARGE and hundreds of other films for 30 free of charge by registering at this link: TRY PLAYALPINISMO FREE OF CHARGE FOR 30 DAYS

PlayAlpinismo - GazzaPlay:
> Tom, the film and the meaning of mountaineering for Tom Ballard
> Touching the void - immortal stories
> Nanga Parbat film - Reinhold Messner, Günther Messner and choices
> The Man Who Skied Down Everest, Yuichiro Miura and that first ski descent on Everest

RELATED NEWS
08/09/2009 - Baffin Island climbing, The Belgarian and more for Favresse, Villanueva and Hanssens
Nicolas Favresse, Sean Villanueva, Stéphane Hanssens and Olivier Favresse have recently returned from an expedition to Baffin Island where they carried out the first ascents of 3 different routes and attempted to free climb the Bavarian Direct on the South Face of Mt. Asgard.