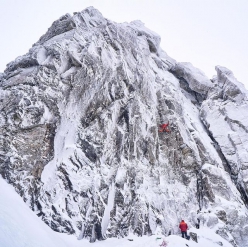 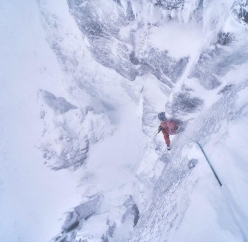 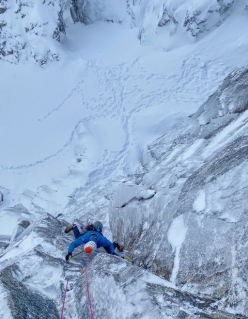 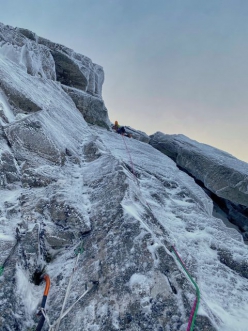 A week after adding New Age Raiders to Church Door Buttress above Glen Coe, Scotland’s Greg Boswell has now another bold new line to Bidean nam Bian. Climbing with Hamish Frost and Graham McGrath, on Monday the 29-year-old returned to the mountain for the third time in a week to climb a line he spotted while repeating the famous Un Poco Loco with Frost a few days earlier.

False Penance climbs the obvious overhanging groove just a few meters to the left and had never been climbed before in either summer or winter. Boswell climbed the steep first pitch to a hanging belay, while McGrath led the second which proved just as committing to give the route an overall grade of IX/10.

After the ascent Boswell stated “I love finding virgin ground that hasn’t been climbed in summer or winter as when you are forging your way upwards, you have no idea what will unfold. There might be a hidden splitter crack through the obvious steepness and lots of gear, or there might be no hooks and progress is impossible. Thankfully we found something just before the later. Our line took on some very overhanging terrain and had just enough tiny placements to make it possible to link through the steepness. Unfortunately the gear was a long way away as I had to commit to the crux moves, so ledge smashing was highly apparent in my mind as I steadily prayed my axes wouldn’t rip on the tiny placements. Eventually I found a way though and got situated high up the wall on a semi hanging belay, ready for someone else to do the next bit. Arms cramping and thankful to be secured to the crag I brought Graham and Hamish up to my position.”

16.01.2018
Boswell and Robertson discover their Holy Grail in Scottish Highlands
Greg Boswell and Guy Robertson have climbed a significant new route on Buachaille in Scotland called The Holy Grail IX/10.