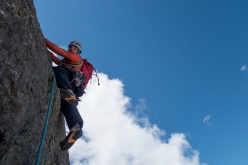 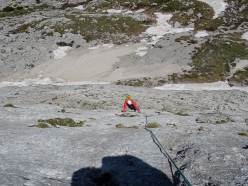 Thomas Gianola and I made the first ascent of this route on a cold day in early summer. While waiting for the sun to warm the air a little, we decided to take our time preparing our gear, so much so that route gets its name from the TV program we watched that morning. We reckon the climb deserves far more attention than the program itself, and look forward to what future ascensionismts have to say.

Alta infedeltà, High infidelity, climbs the beautiful limestone slabs on Sasso delle Undici in the Marmolada group follows the most interesting looking rock. On the second pitch we came across lots of threads, unfortunately we weren’t so lucky on the following pitches and so, in light of the fact that we wanted to make something logical and at the same time not too dangerous, we decided to add some bolts to protect the more demanding sections. Having said that, it’s more of an alpine outing that a sports climb and requires protecting with cams and the ability to run it out on Vth grade terrain a fair way above the last peg.

29.04.2019
Hansjörg Auer: his climbing, his alpinism and the Marmolada Fish route
Video interview dating back to 2008 with Austrian mountaineer Hansjörg Auer, a year after his extraordinary free solo ascent of Via del Pesce, aka The Fish, up the South Face of Marmolada in the Dolomites carried out on 29 April 2007.

02.09.2015
Manolo: Weg durch den Fisch, climbing the Marmolada Fish route thirty years later
After 30 years Maurizio 'Manolo' Zanolla returns to climb Via Attraverso il Pesce, the Fish route on the Marmolada South Face in the Dolomites… and experience those (ghastly and unrepeatable) moments, those distant memories that resurface in an unexpected perspective.

12.08.2013
Invisibilis on Marmolada, the long history of a new route by Larcher and Vergoni
Rolando Larcher and Geremia Vergoni recount the birth of Invisibilis (405m, 7c+ max, 7a+ obl.), the new route established over 5 days from 2009 to 2011 up the south face of Marmolada di Ombretta (Dolomites) and freed by Vergoni on 26/06/2012 and repeated by Larcher on 11/09/2012. A route that breaches fantastic rock up an outstanding face and that recounts the evolution and a style of climbing.