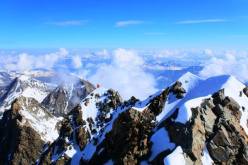 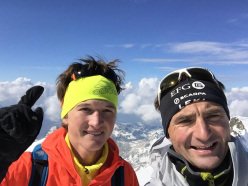 With their ascent of Piz Bernina, Swiss alpinist Ueli Steck and his German counterpart Michael Wohlleben have started their project to climb all 82 4000m summits in the Alps in 80 days.

All 82 alpine 4,000m summit catalogued in the official UIAA list, to be climbed in 80 days, all self-propelled. This is the aim of the alpinists Ueli Steck and Michael Wohlleben who started this project - not new but certainly interesting - not to set a record, but as Steck underlines "… just for fun, for the love of the mountains."

Last year Steck and Wohlleben teamed up togerther for the winter enchainment of the three North Faces of the Tre Cime di Lavaredo in the Dolomites and they yesterday they climbed their first peak, Piz Bernina, reaching the summit via the classic Biancograt and then paragliding back down to valley from shortly below the top. At present the two are pedaling towards the Bernese Oberland where the next 9 mountains lie in store. If all goes according to plan, during this long summer they will negotiate more than 100,000 vertical meters and cycle circa 1000km. Seeing that we’re living in the internet age, their progress can be followed practically live via the tracking on Googlemaps, while updates with photos will be posted on Facebook.

It’s worth remembering that climbing all 82 4000ers in 82 days was, in 2004, the dream of the French alpinists Patrick Berhault and Philippe Magnin, but it was during this alpine tour that Berhault tragically died while on the ridge between Taschhorn and Dom. In 2007 Slovenian mountain guide Miha Valic climbed, with various partners, all 82 summits in 102 days, using a van to move from one peak to the next but in winter. In 2008 the Italians Franco Nicolini and Diego Giovannini completed the linkup of the 82 summits in 60 days, moving about exclusively on foot, on skis or by bike.