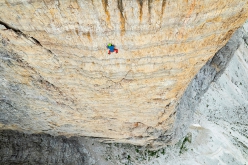 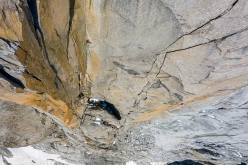 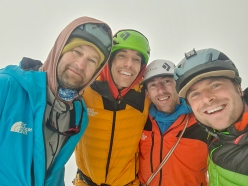 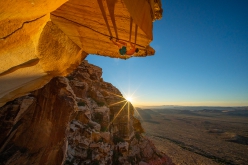 Last summer American climber Alex Honnold made a free solo ascent of Gelbe Mauer / Muro Giallo on Cima Piccola at the Tre Cime di Lavaredo in the Dolomites, and most of the American Direct on Petit Dru in the Mont Blanc massif. His climbs without a rope were filmed as part of the virtual reality project 'Alex Honnold: The Soloist VR', produced by British mountaineer and director Jon Griffith

The news leaked out slowly last summer, but now it's official: Alex Honnold has been up to his old tricks, free solo climbing Gelbe Mauer / Muro Giallo on Cima Piccola in the Tre Cime di Lavaredo group of the Italian Dolomites, and the beef of the American Direct on the Petit Dru in the Mont Blanc massif, as well as several other famous climbs.

The ascents were filmed for the virtual reality project "Alex Honnold: The Soloist VR" directed by British mountaineer and director Jon Griffith and can be viewed now with a Meta Quest VR headset. For those who can't access this technology, three "classic" videos directed by Renan Ozturk have also been published on the Red Bull website. The ambitious project included a handful of other cutting-edge climbers, notably the late Corrado Korra Pesce, Tomas Mueller and Nicolas Hojac who, as Honnold's climbing partner, had the arduous task of keeping up with the 36-year-old American.

Honnold travelled to the Dolomites last July with his sights set on the famous Yellow Wall, first ascended by Stefan Glowacz and Kurt Albert in 1996 on the west face of Cima Piccola. Honnold got his first taste of the route when he climbed it basically as one long single pitch, simul-climbing with Nicolas Hojac. After filming sections of the climb, he rested for a day and then made his daring solo.

After his ascent, in his usual "no big deal" style Honnold told planetmountain.com by email: "We climbed Gelbe Mauer on Cima Piccola at the Tre Cime one day, filmed on it another day, and then I soloed it after a rest day. It was awesome. Great route, really nice position. And it was my first time climbing in the Dolomites so I was really struck by the scenery."

Speaking to planetmountain.com shortly after Honnold's ascent, local expert Simon Gietl confided: "I was struck by the speed with which he decided to solo it. The difficulties aren't extreme, ok, but the exposure is huge, plus the rock quality isn't like on granite, holds can break suddenly. Yes, to be honest, his free solo is mind blowing and simply inconceivable."

After the Dolomites the team returned to its base in Chamonix in the Mont Blanc massif where, despite poor weather, Honnold ascended most of the American Direct (1000, ED), first ascended up the west face of Aiguille du Dru in July 1962 by Royal Robbins and Gary Hemming.

Honnold told planetmountain.com: "I stopped at the anchor at the top of the classic corner, where the route now aid climbs over onto the north face. I wanted to top out but it seemed like a big hassle to carry boots, crampons, and a tool (and a rope) all the way up and then have to descend over glaciers on the other side. So instead I just focused on the good climbing and went up and down."

The first rope solo of the American Direct was carried out on 17 and 18 August 1971 by Frenchman Jean-Claude Droyer, while in 1982 his countryman Christophe Profit completed the first free solo in an astounding time of just 3 hours and 10 minutes.

The team also climbed Dent de Geant but conditions were prohibitive for a free solo. Honnold and Hojac also climbed the Kuffner Ridge. "Not ground breaking in any way" was Honnold's take "but it was pretty exciting for me - I haven't really done that much alpine climbing."

The last phase of Griffith's mega VR project, which is split in two gripping VR episodes, included the free solo of one of the most classic cracks in the American desert, Desert Gold at Red Rocks, freed by Stefan Glowacz in 1984.

20.08.2021
Alex Honnold, Hansjörg Auer and the Oscar winning Free Solo in Climbing Sparkling Moments #8
The eighth episode of La Sportiva's Climbing Sparkling Moments retraces the incredible free solo climbs of Freerider on El Capitan (Yosemite) carried out by Alex Honnold in 2017, and the Fish route (Via del Pesce) on Marmolada (Dolomites) completed by Hansjörg Auer in 2007. Honnold's feat was documented Free Solo directed by Jimmy Chin and Elizabeth Chai Vasarhelyi which in 2019 won the Oscar for Best Documentary.

25.02.2019
Oscars: Free Solo featuring Alex Honnold climbing El Capitan wins Best Documentary
The film Free Solo that chronicles the extraordinary solo, ropeless ascent of Alex Honnold up El Capitan in Yosemite has won an Oscar for Best Documentary. Directed by Jimmy Chin and Elizabeth Chai Vasarhelyi, this is the first time a climbing film has won the most prestigious award in filmmaking.

02.11.2018
Alex Honnold, Freerider, El Capitan: what if he falls?
The short film featuring Elizabeth Chai Vasarhelyi and Jimmy Chin as they analyse the production of Free Solo, the film that documents Alex Honnold and his climb without ropes of Freerider up El Capitan, Yosemite, USA in June 2017.