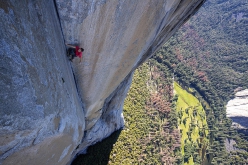 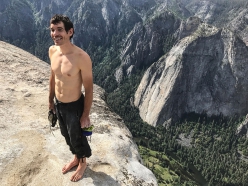 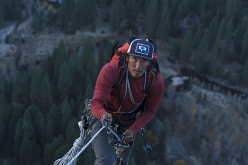 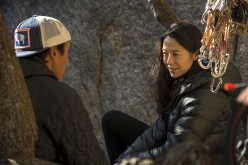 Free Solo, the film that portrays Alex Honnold and his ropeless ascent of Freerider up El Capitan in Yosemite directed by Jimmy Chin and Elizabeth Chai Vasarhelyi, won a BAFTA award last night in the Documentary category. In early February, Free Solo won a Eddie Award at the American Cinema Editors Awards 2019.

Yesterday evening the documentary featuring Alex Honnold and his remarkable rope solo ascent of Freerider up the 1000m high El Capitan in Yosemite won a BAFTA award, the British equivalent of the Oscar Academy Awards, in its Documentary category.

The British Academy of Film and Television Arts awarded the prize to the film directors Jimmy Chin and Elizabeth Chai Vasarhelyi and to Honnold who had all braved the red carpet to take part in the ceremony at the Royal Albert Hall yesterday. Free Solo was chosen ahead of McQueen (director: Ian Bonhôte, Peter Ettedgui), RBG (director: Betsy West, Julie Cohen), They Shall Not Grow Old (director: Peter Jackson) and Three Identical Strangers (director: Tim Wardle).

At the start of February the film had won a prestigious Eddie Award promoted by the American Cinema Editors Guild Awards, while a few weeks earlier it had been nominated for the 2019 Oscar Award. The other documentaries in the running for the biggest prize in the industry are Hale County, This Morning, This Evening (director: RaMell Ross), Minding the Gap (director: Bing Liu), Of Fathers and Sons (director: Talal Derki) and RBG (director: Betsy West, Julie Cohen) and the winner will be announced during the awards ceremony on 24 February 2019.