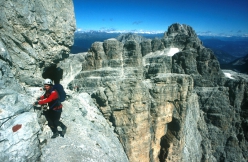 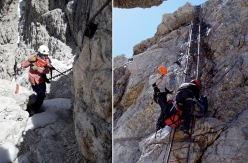 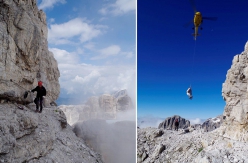 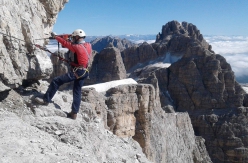 The world-famous Via Ferrata Bocchette Alte in the Brenta Dolomites reopened on 28 July 2020 after maintenance.

The SAT Società Alpinisti Tridentini informs that as of Tuesday 28 July the Via Ferrata delle Bocchette Alte has reopened. This is he most famous via ferrata in the entire Brenta Dolomites and hailed as one of the most beautiful vie ferrate in the world.

The ferrata crosses the Bocchette mountains via a series of exposed ledges and touches an altitude of 3000 meters. I had been closed to the public on 15 June due to maintenance works.

Maintenance was carried out on fixed in particular along the stretch between Bocca del Tuckett and Bocchetta Bassa dei Massodi (#396 fork), but maintenance was slowed down and took longer than expected due to the abundant snow still at altitude.

Always interesting and demanding, the Via Ferrata Bocchette Alte requires a good level of fitness and solid mountaineering skills.

Link: all Brenta Dolomites vie ferrate in the planetmountain.com database