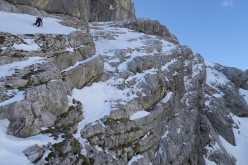 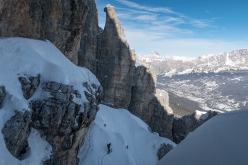 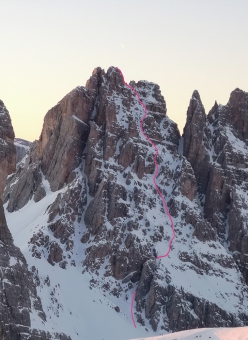 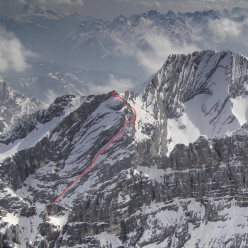 In 2020 Francesco Vascellari and Loris De Barba made what is likely to be the first ski descent of the South Face of Cima Ambrizzola in the Dolomites. A few months later they concluded another project with Davide D'Alpaos, namely the probable first descent of the west face of Croda de Marchi Sud in the Marmarole group.

On 1 February 2020 Francesco Vascellari and Loris De Barba from Belluno made the probable first ski descent of south face of Cima Ambrizzola in the Croda da Lago group of the Italian Dolomites. The run follows the most intuitive line on the mountain and starts right from the summit, past two highly exposed 55° - 60° sections on the upper half. The ascent and descent provided exceptional views onto the nearby north face of Mount Pelmo.

On 5 May 2020 the duo completed, together with Davide D'Alpaos, the long-term project on the west face of the Croda de Marchi Sud in the Marmarole group. The descent follows a long line along constantly changing slopes, via a series of ledges that lead all the way to the summit. The route is hard to make out from the surrounding peaks and consequently also very difficult to photograph.

The difficulties are elevated but not extreme (45°-50°), nevertheless due to exposure, severity of the environment, length and attitude gain this is considered one of the most difficult descents in the Marmarole. Early exploration of this remote mountain group included a descent of the mountain’s twin North summit (slightly lower and reached from the other side) in January 1997 by Maurizio Liessi and Renato Peverelli.

During the rest of the season the trio carried out further significant ski mountaineering ascents and descents. These include reaching the foresummit of Dito di Dio with skis before climbing up to the main summit in snowy conditions, and the descent of Punta Chiggiato, the sister peak of Antelao. This little-known and little-repeated Dolomites 3000er was probably first skied in 1997 by Poles and Baldi from Pieve di Cadore.

19.01.2015
First ski descents in the Dolomites by Vascellari, D'Alpaos and De Barba
Between February and May 2014, Italian skiers Francesco Vascellari, Davide D'Alpaos and Loris De Barba carried out a series of first ski descents to solve some old problems in the Dolomites. They concluded their run with a repeat of the East Face of the Matterhorn, first skied by Tone Valeruz in 1975.