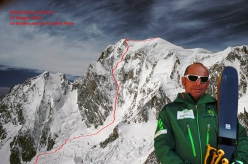 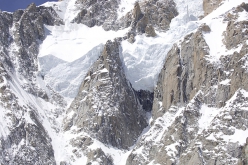 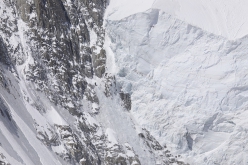 On Monday 25 May 2020 the Italian mountain guide Edmond Joyeusaz skied from the summit of Mont Blanc down the Comino - Grassi route on the Brenva face, following the line first ascended in 1979 by Gianni Comino and Gian Carlo Grassi.

Last Monday Edmond Joyeusaz, a 62-year-old mountain from Courmayeur, scored an important and in many ways astounding first ski descent on Mont Blanc, starting from the top of the highest mountain in the Alps and skiing an extremely exposed and dangerous line down the inhospitable Brenva face.

In practice, Joyeusaz skied to the left of the immense serac suspended between the Poire, the obvious pear-shaped granite buttress, and the Peutérey ridge, following the line first climbed on 10 and 11 August 1979 by Gianni Comino and Gian Carlo Grassi. In total, Joyeusaz negotiated 1500 utterly dangerous vertical meters to the foot of Pilier d’Angle, down 50° - 65° slopes, via three abseils.

"I reached Col della Brenva by helicopter. I chose to do this in part because, due to the lockdown, I lacked the fitness necessary to ascend the face from the bottom and then deal - physically and mentally - with a descent as demanding as the Poire." Joyeusaz told planetmountain.com. The adventure began at that point: "From Col de la Brenva I reached the summit and then started to ski down towards Mont Blanc de Courmayeur to reach the Poire descent." This is where the great ski descent, or rather the terrible and fascinating abyss, began. For those familiar with the wild side of Mt Blanc, and in particular this section marked by the awesome Poire pinnacle, the descent seems almost incomprehensible. The draw of this line mush have been truly irresistible for Joyeusaz."It was an old dream of mine, I can see the Peuterey Ridge from my living room window ... Id’ planned on doing it in 2021. But I couldn't resist. I didn't want to waste another year." Perhaps also because he is aged "differently", having been born in 1958. Joyeusaz then clarifies a final point, with disarming sincerity, as if he were talking about any old descent and not a landmark steep skiing descent. "The three abseils were obligatory, I had to do them beacuse there was no snow (below the serac, down to the right). In any case, prior to setting off I thought I’d have to do at least one."

LA POIRE by Edmond Joyeusaz
This wasn’t meant to be the year for it, but then Covid forced me to change my plans. I should have finished my steep skiing project in Switzerland’s Valais, (Swiss4000SteppSki) but due to the uncertainty associated with traveling across the border, and the possibility of remaining under "house arrest" on my return to Italy, convinced me to anticipate skiing "La Poire” by a year. The Poire is a rocky spur located just below the summit of Mont Blanc that, seen from below, resembles a pear. The Brenva face of Mont Blanc is the wildest and most rugged side of the mountain, due to its sheer size it is on a par with the more noble faces of the Himalayan mountains. Many of the most talented alpinists of all times have ventured onto this face, and those who have established routes here form an integral part of the history of mountaineering.

The idea of ​​skiing from the summit of Mont Blanc down the route first ascended in 1979 by Gianni Comino and Giancarlo Grassi came to me while observing the mountain from my balcony. After years spent observing and evaluating the line, I identified a possible route that descends from the top of the Mont Blanc of Courmayeur almost vertically between the Poire and the extremely steep rock spurs of nearby Aiguille Blanche, all the way down to the Brenva glacier. Circa 1,500 meters altitude drop. This descent is unprecedented in terms of technical difficulties, exposure, objective dangers and vertical drop.

On Monday 25 May I was on the summit of Mont Blanc, it was quite cold, around -15°C with gusts of wind from the west up to 30 km/h. The snow wasn’t hard, but it was windy, as often happens at those altitudes. As you descend towards Mont Blanc du Courmayeur (4,748m) the slopes are gentle, so I got familiar with the void. I’d skied a few days earlier, one last training session, but never on important slopes; Covid-19 had created many problems, even for myself, and maintaining decent form had proven difficult. As you continue from the top of the Mont Blanc du Courmayeur the angle immediately become serious; after the first serac on the left a steep gully, fortunately covered in snow, enables you to reach the serac to the left of the Poire. When you look at this part of Mont Blanc from down in the valley, you have the feeling that the ambient up there is majestic, but once you’re actually in it, you realise how truly impressive it really is. The serac is at least 300 meters thick and you realise that, among all that ice, you are completely insignificant as the 10-storey block of ice could collapse at any moment and sweep you away. But even a piece of ice as big as a tennis ball could hit you and make you fall. In run-up to my descent, I’d flown above the seracs and couloirs to see what they were like; conditions seemed good, even if I failed to get particularly close since above 4000m there was a lot of downforce and I struggled to maintain the altitude. Unfortunately, the strong northwesterly winds that swept across the mountain on Sunday afternoon however worsened conditions considerably. The snow had been swept away, result: in many places ice had resurfaced, which made the descent considerably more difficult and dangerous. After the first serac there is no chance to escape the face, you must either descend or climb back up. There’s no way to exit sideways from that huge funnel of ice and vertical rocks.

3 abseils (120m) were needed to negotiate the section below the serac, completely devoid of snow. These were then followed by a narrow sliver of snow on which my skis barely enabled me to ski to the base of Pilier d’Angle, for a total of 1500 meters altitude difference. This is certainly the most difficult descent I have ever skied in my entire career; very complicated, a constant angle, often above 55° with some sections at 60°.

Ever since the early 1970s all the world’s best extreme skiers have ventured to this side of Mont Blanc: in June 1973 South Tyrol’s Heini Holzer descended the Brenva spur. In 1977 Patrick Vallençant and Anseme Baud skied the Arête de Peuterey. In April 1978, Toni Valeruz flew to the summit of Mont Blanc by helicopter and then descended the central Gran Couloir of Brenva, which drops straight from the summit of Mont Blanc, between the Major route and Sentinella Rossa (Red Sentry route). In 1979 Gianni Comino and Stefano de Benedetti descend the Major spur. In 1988 Pierre Tardivel made the first ski descent of Pilier d'Angle after being dropped off on the top by helicopter. I am particularly satisfied and proud to have left my "tracks" on this magnificent side of Mont Blanc, too.

I’d like to thank the team that has accompanied me on these adventures for years: The friend and mountain guide Arturo Jacquemod for the technical assistance, Jean-Marie Rossi for the photos and videos. Simone Vigna for the drone images.

25.07.2013
Luca Pandolfi and the Sentinel Rouge Couloir on Mont Blanc
Luca Pandolfi talks about his descent of Grand Couloir of Sentinelle Rouge, carried out with Ben Briggs and Tom Grant on 5 July 2013.