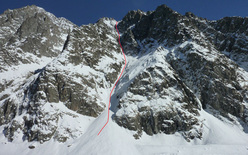 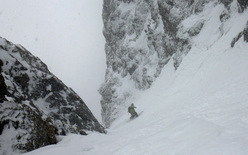 Davide Capozzi and Roch Malnuit have carried out the probable first descent of the SW Couloir of Col du Brouillard in the Mont Blanc mountain range.

Some winters give away little or nothing at all. During others the snow cover transforms perfectly and those slopes which have been dreamt about for so long suddenly come into condition. This is exactly what happened in mid January on the Aiguilles du Brouillard for Davide Capozzi and friends, and what repeated itself a few days ago on the nearby Col du Brouillard. This time Capozzi descended the SW Couloir with Frenchman Roch Malnuit, making what is likely to be the first ever descent of this gully in the Mont Blanc mountain range. Here's his brief report.

A few days ago I descended the SW Couloir of Col du Brouillard with Roch Malnuit, the talented alpinist, snowboarder and base jumper from Chamonix. Col du Brouillard is located on the distant Miage glacier and we returned there since this line was the most logical and beautiful on the Aiguilles Rouges du Brouillard. The gully is 1100m long, 45° - 50° steep with some sections which narrow down to 1.20m. We used a rope for one 10m section at the end to avoid taking any risks, seeing that the snow was extremely hard at this point. The weather wasn't good... it was snowing and visibility was reduced. I've never heard of anyone who has descended this gully, snowboarders definitely haven't!

It's important to understand that things like this don't happen on a weekly basis, it's not easy to carry out a new descent here. But incredibly this January - during which it never snowed but was extremely cold - has provided us with the possibility of trying new lines which would probably have been abandoned in favour of the classic steep descents.