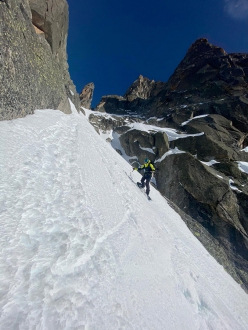 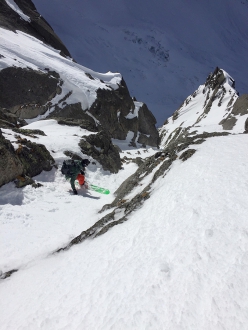 Yannick Boissenot and Julien Herry ascending the first two pitches of the Contamine Vaucher prior to making the first descent of the Boeuf - Sara couloir on Aiguille du Peigne, Mont Blanc on 09/02/2020
Photo by Hensli Sage 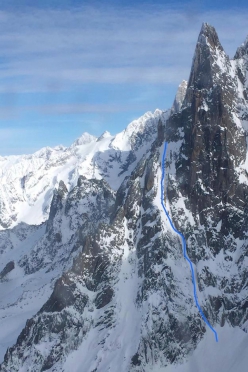 The line of the Boeuf - Sara couloir on Aiguille du Peigne, Mont Blanc, skied and snowboarded on 09/02/2020 by Julien Herry and Yannick Boissenot
Photo by Hensli Sage

On 9 February 2020 Julien Herry and Yannick Boissenot made what is likely to be the first ski and snowboard descent of the Boeuf - Sara couloir on Aiguille du Peigne in the Mont Blanc massif. Herry reports.

Finding new lines in the Mont Blanc massif is an arduous task nowadays, but every now and then someone manages the seemingly impossible. On 9 February Julien Herry, Yannick Boissenot made the probably first descent of the Beuf-Sara couloir on Aiguille du Peigne, having reached this via the first 2 pitches of the Contamine Vaucher route. Herry reports.

Boeuf - Sara couloir on Aiguille du Peigne
In 2012 I understood the potential (and easy access) of this area for steep skiing. That year we snowboarded the most obvious line coming down from Col des Pèlerins twice with Davide Capozzi. In 2013 we got the chance to ride the two neighbouring lines (with Luca Rolli as well) which were even more beautiful. The following year we tried a line on Aiguille du Peigne for the first time but had to bail before the top. In recent years I have been exploring the north face of this mountain with Sam Favret, as well as Couloir des Papillons with Helias Millerioux. Last year I went to the base of Boeuf-Sara couloir with Sam but the overhanging boulder leading to the couloir was just too awkward to get through. I realised though that the easiest way to ascend was probably to do the two first pitches of the Contamine Vaucher route on the right.

Last Sunday, despite a bad weather forecast, I took the first lift to Aiguille du Midi with Yannick Boissenot. Hensli Sage came with us as well to film this adventure with his drone.

After an hour of touring, the mixed climbing on the rock brought some spice to our morning. After leading and fighting for 20m I was happy to find a bolted belay and have a rest, climbing with the board on the backpack was as hard as expected. Then Yannick took the lead for another 30m. The actual climbing was never too hard, but finding good protection was delicate.

A short traverse to the left finally brought us into the couloir that we managed to climb easily for the first 100meters. Our hope of discovering a hidden snow ramp to exit the couloir vanished quickly so we climbed a short, steeper icy step in the couloir instead. The snow on the exit ramps quickly got soft in the sun and we managed to reach a small col at around 3000 meters…

On the way down the snow was variable but mostly soft and we made a first 15m rappel to link the top ramps with the main couloir. Then the skiing became a bit more technical until the last 40m steep rappel.

30.01.2019
Les Drus: Triple Couloir tracked by Julien Herry, Laurent Bibollet
French alpinists Julien Herry and Laurent Bibollet have scored the first descent of the Triple couloir on the West Face of Les Drus in the Mont Blanc massif. The two descended on snowboard.