Slovenian mountaineer and extreme skier Davo Karničar, famous in particular for his first integral ski descent of Everest down the mountain’s south face.
Photo by 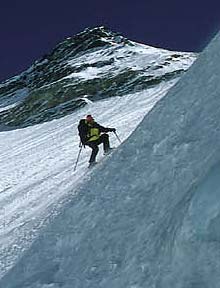 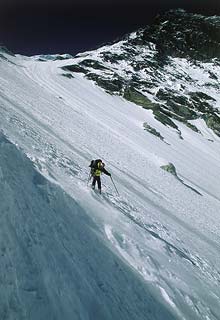 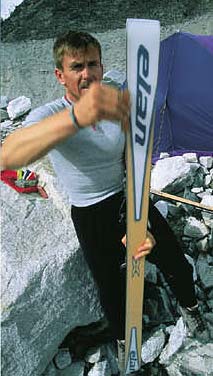 On 16 September 2019 the Slovenian mountaineer and extreme skier Davo Karničar lost his life. Karničar was famous in particular for his first integral ski descent of Everest down the mountain’s south face.

A little less than 20 years ago, on 7 October 2000 to be precise, all of Slovenia ground to a halt to witness Davo Karničar ski the south face of Everest, all the way from the summit down to Base Camp. The feat was described as The Ultimate Ride, a definitive, landmark descent, and quite rightly so: from the 8848m summit Karničar never took his skis off as he first negotiated the ridge, then the infamous Hillary Step to run down to Camp 4 on the South Col, before skimming on down through the Valley of Silence and passing the notorious, labyrinthine Icefall on its left.

The descent - not to be confused with that of Hans Kammerlander on the mountain’s north face in 1996 - is certainly the achievement that propelled the 38-year-old skier into the international mainstream limelight, but the member of the Yugoslav ski team had already carried out a series of hair-raising descents, such as the first ski descent of Annapurna in Nepal in 1995 with his brother Drejc, as well as descents of the NE face of the Eiger and the east face of the Matterhorn.

Karničar reportedly carried out more than 1800 ascents in the mountains and his loss, probably due to an accident while working in the forest close to his home, is absolutely enormous. Not only for the small country of Slovenia that for generations has continued to produce great, grande mountaineers.

28.03.2002
Everest climbing and skiing history
The first ascent of Everest was carried out in 1953. The timeline about the first ski and snowboard descents off the highest mountain in the world.