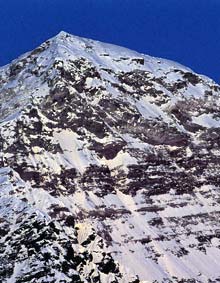 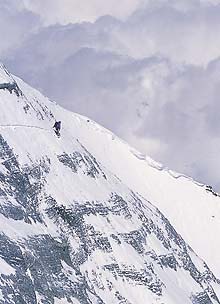 The first ascent of Everest was carried out in 1953. The timeline about the first ski and snowboard descents off the highest mountain in the world.

The summit of Everest was first reached on 23 May 1953 by Edmund P. Hillary and Sherpa Tenzing Norgay.

Rehinold Messner and Peter Habler became the first mountaineers to climb Everest without the use of supplementary oxygen in May 1978. In 1980 Messner made his historical and epic solo ascent without the oxygen. Fast and clean alpine style ascents were only just beginning to make their mark over enormous expeditions that adopted siege-style tactics. Messner innovative style drew a clear and indelible line between the future of mountaineering and the conquests of the past eras.

The first ski descent of Everest was carried out by the 30-year-old Yuichiro Miura from Japan. His descent verged on the suicidal: Miura climbed Everest from the north, reaching 8150m After down climbing a few hundred meters he skied directly down the 45° face equipped with a parachute. After realising that his parachute would never have held his fall he tumbled down the face. His team members managed to save him and carry him back down to base camp.

In 1992 the Frenchman Pierre Tardivel climbed from the south and skied off the pre-summit, making the most of unusually good snow conditions. In May 1996 the Italian Hans Kammerlander became the first person to reach the summit of Everest with skis. His extraordinary solitary and oxygenless ascent was carried out via the North Col in just 16 hours 50 minutes. His descent was severely hampered by the lack of snow and Kammerlander was thus forced to descend on foot for almost 1000m.

28.03.2002
Davo Karnicar, skiing down The Ultimate Ride on Everest
Interview by Emilio Previtali with 38-year-old Slovenian extreme skier and alpinist Davo Karnicar after his ski down the South Face of Everest.
28.05.2001
Everest, Marco Siffredi snowboards down the Norton Couloir
On 23 May the Frenchman Marco Siffredi, snowboarded down the Norton Couloir on the 8850m North Face of Everest, 8850m