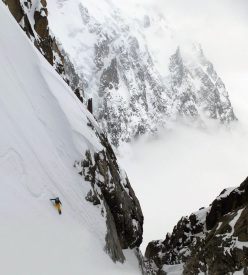 A probable new line on the Brèche NW des Deux Aigles, the face located between gendarme des Pélerins (3410m) and Aiguille des Deux Aigles (3487m). On Saturday, after having climbed the SW couloir for 500m past slopes around 50° and a 40m mixed section, Davide Capozzi and Julien Herry carried out the descent describing it as "beautiful, perhaps the most beautiful one we've done in this sector" After the nearby first descent of the Aiguille des Pelerins Voie Normale, this is the first known snowboard descent - and possibly even the first descent ever - and one short abseil was needed. The overall grade is estimated at 5.3 E3.

Another beautiful descent in this area which never ceases to amaze. This was the third descent that Julien and I carried out in this beautiful Aiguilles de Chamonix, an area which can be seen clearly from Aiguille du Midi but which isn't visited very often.

The day had started badly, our objective was a different one but conditions weren't as we wanted, so we check out this splendid gully. We didn't hope for much, but instead everything was perfect. It's difficult to find the right moment for lines like this one: at the start of the season there is little snow, in spring these SW facing gullies quickly melt away. And indeed, we opted for this sector just a few days after the last snowfall and we went when the forecast had predicted overcast skies, so that the sun wouldn't warm the slopes up too much. A good decision!

This year the abundant snowfalls have ensured that this entire area is packed with snow, much like all the other areas on the Mont Blanc. This is our second descent here in just a few weeks for several reasons: firstly, because of closeness to the ski lift (the Aiguille du Midi cable car) which means you can carefully monitor the conditions of the gully and the approach is pretty quick, secondly because when the weather is uncertain and you don't want to risk too much this is a good alternative to higher altitude descents. And thirdly, there's never anyone else! We descended it on 23 March 23, on Julien's birthday.