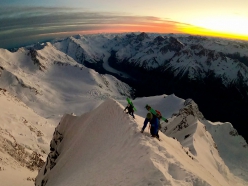 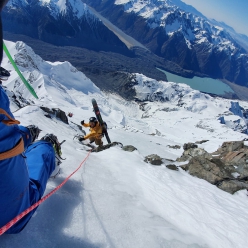 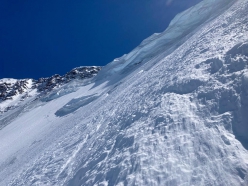 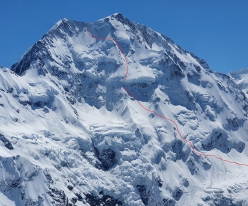 On 21 October 2021, New Zealand mountaineers Joe Collinson, Will Rountree and Sam Smoothy made the second descent of the 2000m Caroline Face of Aoraki / Mt Cook, at 3724m the highest mountain in New Zealand.

The formidable SE Face of Aoraki / Mt Cook, usually referred to as the Caroline Face, was described as the ‘last great problem’ of New Zealand mountaineering when it was first climbed 40 years ago, due to its sheer size and complexity, its steep gradient and exposure and the huge seracs which can collapse and cause large avalanches to sweep down the face.  For the last decade it has become a coveted prize for the ski mountaineering community with multiple strong teams from around the world attempting to ski the face.  After various  unsuccessful attempts including the tragic death of Magnus Kastengren after a fall in 2013, the face was finally skied in 2017 by Tom Grant, Ben Briggs and Enrico Mosetti.

The descent last month by Joe Collinson, Will Rountree and Sam Smoothy is the first descent since then, and the first by a local Kiwi team.  The trio ascended the East Ridge to middle peak - a serious climb in itself including 300m of WI2/3 ice - and then entered the face via a rappel from Porter Col. One further rappel was required to get through the central serac band - otherwise the conditions were perfect with boot top powder the entire way down the 2000m face. The most challenging aspect of the descent was waiting for the conditions to be right, as the face often has large sections of bare ice