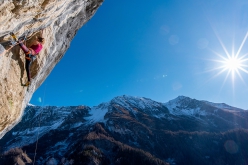 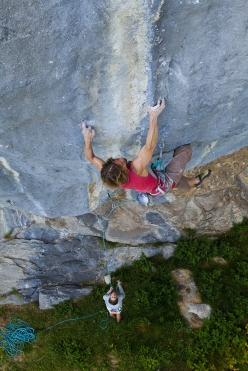 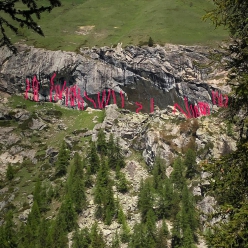 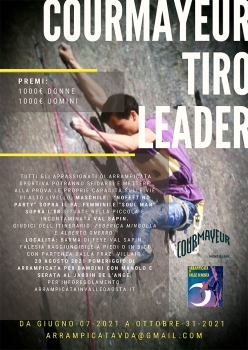 This summer and autumn the picturesque Val Sapin above Courmayeur in Italy’s Aosta Valley hosts the third edition of Tiro Leader, a climbing challenge to free two difficult sport climbs at the historic crag La città di Uruk. The first to free the routes bolted by Federica Mingolla and Alberto Gnerro receive € 1,000 prize money. Furthermore, on 20 August Manolo will climb with children prior to his evening talk at the Jardin de l’Ange.
Photo by Planetmountain

Interview with Alberto Gnerro and Federica Mingolla, the two ‘judges’ of the Tiro Leader Climbing Challenge in Val Sapin above Courmayeur in Italy’s Aosta Valley. Until October two climbs, one for men and one for women, at the historic crag La città di Uruk await the first free ascent; € 1,000 for each route are up for grabs.

Val Sapin is a small jewel in Courmayeur’s crown, less famous than neighbouring Val Ferret and Val Veny at the foot of the Mont Blanc massif, but equally fascinating. And, from the sport climbing perspective, home to a rare gem: La città di Uruk. This historic crag at 1500 meters above sea level was bolted in the 1980s and then, for various reasons, it fell into oblivion. In recent times the smooth sheet of overhanging limestone has been experiencing a sort of revival thanks to the Alberto Gnerro who bolted almost 40 climbs of all difficulties. Including two used for the Tiro Leader climbing challenge, a “friendly-competition” on two routes that have yet to be freed. The routes already have a name, are called No Feet No Party and Soul Man, and the first male and first female to free them will receive a prize money of € 1,000. We talked to the two “judges” Alberto Gnerro and Federica Mingolla to find out more.

Alberto, first of all tell us about this crag. What were your thoughts when you first saw it
It was Andrea Plat who first showed it to me, and when I saw it it felt like I had arrived at a small Céüse! Then, on closer inspection, I realised that the rock is a little different, with less holds. In the early 2000s I used to go up there on my own alone, starting by bike from where the road is closed, towards Rifugio Bertone, and then I bolted the routes we’ve got now. I could never find anyone who wanted to join me, perhaps the place was too isolated, but this wasn’t really a proble, for me these were good moments, of discovery. Then in 2006 I founded my Run Out climbing gym in Biella and I managed to involve the youngsters, because we also got a hut up here in the valley and could get to it by car! So I avoided them the long walk-in, but not the hard routes ;-) In the morning I bolted new lines, in the afternoon we climbed them.

What about your first impressions Federica?
Val Sapin is a beautiful place, when you start the approach you realise that it’s not going to be another usual cragging day, but something special, up in the mountains, breathing in the fresh air, enjoying the beautiful panorama from the cliff. When I first got there I was immediately bowled over by the quality of the limestone and the beauty of the place, and then I also realised that the climbing was not quite as “straightforward” as at other crags ... which is why I’ve always struggled to find climbers willing to come and join me here. Recently though some new climbs have been added, far easier, and this has significantly increased the crag’s popularity.

Currently there are almost 40 routes, including the two that are used for the Leader competition. Alberto, tell us about the men’s route.
The men's route was originally a little different from what it looks like today. I used to go directly up through a completely blank section where I originally chipped some holds, then though I realised that it would go slightly to the right, so I filled in the holes and modified the line. I’d describe it as being super physical; an initial overhang somewhere around the 8c mark is followed by a hard boulder crux right at the last bolt, just below the chain. Your feet are always smearing on smooth footholds, it takes great sensitivity to push just the right amount. It’s 20 meters high in total, which perhaps doesn't seem like much nowadays. But I guarantee you that with this intensity, it’s more than high enough!

You’re undoubtedly right. So what about the women’s route Federica?
Even the women’s comp route is pretty tough, but homogeneous. I’d define it as a slightly overhanging endurance test on distant and sometimes slopey pockets. I personally really liked it because it’s a style of climbing that is practically impossible to find here. I only tried it on one day when the route was a bit wet, and on towrope I managed to climb it all the way to where it had been cleand. Alberto has added another 2-3 meters in the meantime, meaning I’ll have to return to complete my recon. The grade is somewhere in the region of 8b+, we'll see.

This year Alberto you’re a "competition judge"
Yes. We hope the weather is on our side, and that the routes will be attempted and freed. We’ll need an uncut video to validate the ascent. The best time of year to give it a go is coming now,  late summer all the way through to late autumn. The crag gets the shade in the early afternoon and that’s when friction is at its best. I'm curious.

Federica?
I hope that some girls will come and give it a go, not only because the route is great, but also because its beautiful to climb in such a heavenly location. And let's not forget that there’s also some impressive prize money for those who free the climbs. But that’s just one other factor. I reckon people should give it a go because it’s there, ready and waiting, in a superb mountain setting. What more could one ask for?

04.06.2021
Val Sapin Tiro Leader climbing challenge above Courmayeur in Valle d’Aosta
This summer and autumn the picturesque Val Sapin above Courmayeur in Italy’s Aosta Valley hosts the third edition of Tiro Leader, a climbing challenge to free two difficult sport climbs at the historic crag La città di Uruk. The first to free the routes bolted by Federica Mingolla and Alberto Gnerro receive € 1,000 prize money. Furthermore, on 20 August Manolo will climb with children prior to his evening talk at the Jardin de l’Ange.

14.07.2020
Massimo Bal: Barliard in the Ollomont Valley and the first ascent climbing contest
Interview with mountain guide Massimo Bal, prolific setter of new routes throughout the Aosta Valley and the driving force behind the Barliard crag in Valle di Ollomont where € 1,000 worth of climbing gear can be won at the innovative first ascent climbing contest.

08.07.2020
First ascent climbing contest at Barliard in Ollomont valley, Valle d'Aosta
A new contest has been launched at the crag Barliard in the Ollomont valley in Valle d’Aosta, Italy    where two sport climbs have been bolted and await a first ascent. The first male and female climbers to free the routes will receive climbing equipment to the equivalent of € 1,000.