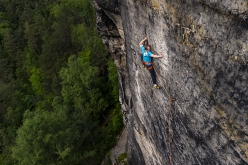 Robert Leistner climbing his 'Vertreibung der letzten Idealisten' up the Nonnengärtner tower in the Elbsandstein massif of Germany. What makes this climb remarkable is that is was first ascended and freed, as per tradition, ground-up, past long runouts between the ring bolts and without chalk.
Photo by Fabian Fischer 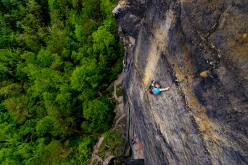 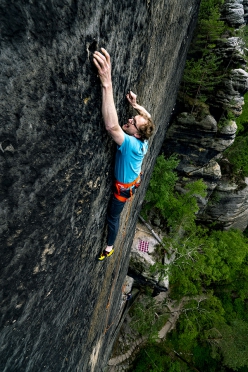 Robert Leistner climbing his 'Vertreibung der letzten Idealisten' up the Nonnengärtner tower in the Elbsandstein massif of Germany. 'By using chalk you can create conditions that otherwise wouldn’t come about naturally, whereas, on the contrary, doing without chalk forces you to do things more slowly. It is precisely this process of waiting, of being patient, that is really important, as you wait for the moment to arise when Mother Nature allows you to climb something.'
Photo by Fabian Fischer

German rock climber Robert Leistner has made the first free ascent of Vertreibung der letzten Idealisten up the Nonnengärtner tower in the Elbsandstein massif in Germany. Graded 12a, or French 8c, this is now the most difficult climb in the German part of the Elbsandsteingebirge. What makes this climb remarkable is that is was first ascended and freed, as per tradition, ground-up, past long runouts between the ring bolts and without chalk.

The sandstone Elbsandsteingebirge close to Dresden in Germany is widely recognised as one of the oldest climbing areas in the world where at the end of the 19th century rock climbing started to evolve into a sport. In this birthplace of free climbing new standards of difficulties were set again and again, including the world’s first 6a and 6b, and nowadays its characteristic free standing towers and walls host more than 22,000 rock climbs.

As such the Elbsandstein stands as one of the most historically important climbing areas in the world, steeped in tradition and rigid ethics; no metal protection such as nuts and friends in order to protect the soft rock, but instead knotted slings and the occasional ring bolt placed ground-up. Furthermore, chalk in the German part of the Elbsandstein is still strictly forbidden, adding to the spice of the runout climbing.

It is in this context that one has to examine the latest ascent carried out two days ago by Robert Leistner, the German climber who made the first free ascent of "Vertreibung der letzten Idealisten", Expulsion of the last idealists, a two-pitch outing up the West Face of the huge Nonnengärtner tower. The first free ascent came about 14 years after Leistner had completed the first ascent in summer 2005 and sports 8c climbing and - obviously - long runouts past small threads and big ring bolts.

Robert, what can you us about the route

Well it’s an integral part of Elbsandstein’s climbing history. It was first envisaged in the 1980’s by local expert Bernd Arnold, who after a series of attempts managed to climb up to a third ring bolt. After that he ran into extreme difficulties and was forced to abandon the project.

You took it up in 2005
That’s correct. That summer I climbed ground-up into new terrain and added a further 5 rings. Although I reached the top of the tower that day, I wasn’t 100% happy because towards the top I’d moved right into easier terrain and onto a classic Arnold climb. The original idea had been to climb ground-up all the way through the central section of the wall, so I returned later that September and straightened it out.

With that first ascent you completed what was hailed in the German press as a Meilenstein, a milestone, for climbing in the Elbsandstein. Now you’ve now taken things to the logical conclusion with the first free ascent. What moment do you cherish more, the first ascent or the first redpoint?
The two things you’ve mentioned are two entirely different ballgames and I view both as equally important and beautiful. They provide different challenges and sensations, the physical and mental processes and demands differ considerably. But to answer the question, I can still remember extremely clearly that feeling of happiness in 2005 when I finally reached the top. That joy was almost more overwhelming than what I felt the other day.

The project was initiated of 30 years ago by Bernd Arnold. Now that you’ve completed the line, have you heard from him?
Of course! We're often in touch and I phoned him immediately after the redpoint. He said "the lid has now been put on the jar." A big dream of his has now come true.

So tell us a bit about the climb
Well it’s almost 60 meters long, split into two pitches. The first is only about 15m high, French 7c+ I’d say to a good ledge, and acts as a good intro to what lies in store. My belayer reached me, and from there I started up the next 40 meters or so which is somewhere in the region of 8c. So about 60 meters that overhang constantly, about 3 meters in total. Tiny crimps, minuscule pockets, athletic moves past long runouts. You need to be in good shape, physically but also mentally.

Is the route protected by ring bolts only?
No, the redpoint crux for example is protected by a knotted 5mm kevlar sling, about 3 meters below you. It’s demanding psychologically, especially since the climbing weaves to the left and right following the line of weakness. You’re looking at up to 15 meters falls. The psychological aspect, dealing with your fear, is certainly an issue.

Tell us more about the bolts. What type are they?
Elbsandstein, as the name indicates, is a soft sandstone and so we have our own type of ring bolts. Mine were actually produced by my uncle. The ethics here dictate that they’re placed on lead while climbing ground-up. First I drilled the hole hanging off a small crimp and a cliff hook, then added a strip of lead and hammered in the ring. Imagine a peg 20mm wide that is driven into the rock for about 18cm. They’re pretty big, but on the other hand we’re not allowed to place them less than 3 meters apart, usually they’re much further.

14 years have passed since your first ascent
I actually tried to free it in 2007, but after a few attempts I got the feeling that it was unrealistic. At the time it was far too difficult for me, so I let it be. But the wall didn’t let me go. During all these years it kept haunting me and every now and then I returned to have a look.

Then the motivation returned
Of course you need the right motivation, that’s true, but you need far more than that. You need to be on form physical and mentally, and you also need perfect conditions. Without a breeze blowing from the northwest for instance you stand no chance of climbing it without chalk.

Explain
Nowadays in some parts of the Czech Elbsandstein chalk is allowed, but not here by us. I view climbing without chalk as an essential part of our climbing heritage. Doing without chalk means that you can only climb a route in very precise conditions, that don’t occur very often.

That could be frustrating
Sometimes. By using chalk you can create conditions that otherwise wouldn’t come about naturally, whereas, on the contrary, doing without chalk forces you to do things more slowly. It is precisely this process of waiting, of being patient, that is really important, as you wait for the moment to arise when Mother Nature allows you to climb something. When conditions are right Nature and mankind come together in a sort of symbiosis. And when everything falls into place, like it did the other day, the result is something extremely powerful and beautiful.

22.09.2009
Andreas Proft interview – a free spirit
Interview with Andreas Proft, the German climber who has managed to climb up to 8b without climbing shoes.

02.04.2009
Winds of change for climbing on Czech sandstone
The Czech Mountaineering Union has passed a bill, still to be accepted by the Ministry of Environment, approving the use of chalk on Czech sandstone.
19.12.2005
Cristian Brenna autumn update
Cristian Brenna climbed in the Czech Republic andSardinia where he repeated "Sapientino" (8c) and "Anime Salve" (8b+) and on-sighted "XL" 8a/a+, "Raoni" 8a and "Totem" 8a at Cala Fuili, and "Manifesto" 8a at Jerzu.