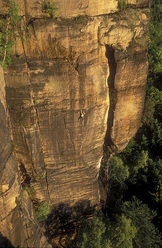 Winds of change for climbing on Czech sandstone

The Czech Mountaineering Union has passed a bill, still to be accepted by the Ministry of Environment, approving the use of chalk on Czech sandstone.

In a historic ruling the Czech Mountaineering Union recently passed a bill approving the use of chalk on Czech sandstone. Ratified by an impressive majority (2034 votes for, 586 against, 169 neutral), the national measure has still to be applied by the local mountaineering commissions and the Ministry of Environment, but if accepted would mark an important change in an area renowned for its long tradition and rigorous ethics.

In truth, chalk has already being used on the sandstone cliff Labak which offers some of the best sport climbing on sandstone in the country, but by lifting the ban all climbers, not only foreigners visiting the area, should no longer find themselves in contrast with complicated local laws. Jiri Sika of czechclimbing commented: "It is a very long and interesting story, which goes deep into the history of climbing on sandstone in both the Czech Republic and Germany. Hopefully now there will be less friction between those for and against chalk. Some climbers fear that on-sight climbing will change for good and that an increase in the number of visitors will result in some additional restrictions. It also has to be said that there are plenty of new climbers who know very little about tradition, have less respect for the environment and tend to use lots of chalk, regardless of the difficulties."

Visiting climbers should note that according to Czech legislation non-UIAA members are not permitted to climb in the Republic. In particular, climbers belonging to the German DAV and the Austrian Alpenverein should be aware that the decision by their two clubs to leave the International Federation at the end of 2008 means that they are now no longer allowed to climb at these crags which tend to be located in highly regulated National Parks and Protected Areas. To get around this hurdle, foreign climbers wishing to visit the Czech Republic are asked therefore to join the Czech Mountaineering Union. Click here for further information.