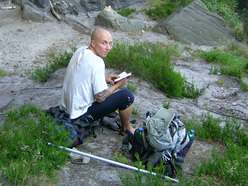 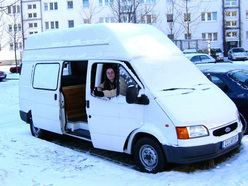 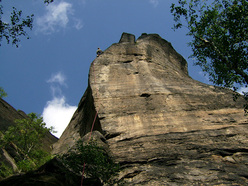 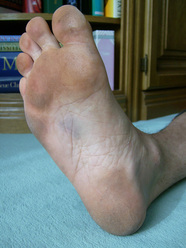 The feet of Andreas Proft...
Photo by archivio Proft

Interview with Andreas Proft, the German climber who has managed to climb up to 8b without climbing shoes.

A few months ago we reported about Andreas Proft, the German who climbs mainly barefoot and who has managed to redpoint up to an incredible 8b without shoes. This isn't something that happens every day, on the contrary, and this choice – shared by few such as the Italian Erri de Luca – got us curious. We discovered that Proft was born in East Germany and that his unique outlook on life has resulted in him not only excelling in barefoot climbing, but more importantly discovering the world. Before heading off to Spain for the next 7 months he granted us this interview and gave us some insight into his life. As no doubt you'll agree, this is yet another example of how beautiful and varied our climbing world can be.

Hi Andreas, you're best known for your climbs without shoes. Tell us how you got round to climbing this way.


It all started when I wanted the warm-up routes and the routes my wife and I climbed together to be a bit more challenging. In addition, climbing barefoot also meant that I had to spend less money on shoes...

You were born in East Germany, where in the Elbsandstein Gebirge for example climbing without shoes is part of the local tradition.
Yes, I lived just south of the city of Dresden. As you know the Berlin Wall came down in 1989 and I climbed in this area between 1995 and 1997, so I didn't really experience these "hard climbing times" and anyhow at that time I always climbed with shoes. Now when I climb in this area I sometimes use shoes because you're not allowed to use chalk, and without it your feet start slipping. Using chalk on my feet is just as important as on my hands!

Climbing barefoot has become a part of you
As I said, I still use shoes sometimes, but as long as it's warm enough and I still have skin on my toes I prefer barefoot climbing. If you think about it, toes are not really that different from fingers, they too get stronger and more resistant to pain.

Tell us about your climbs
Well, the hardest I've redpointed barefoot was a route called First and last, an 8b at the Bernia crag in Coasta Blanca. I needed about 2 weeks to climb it and it almost caused a marriage crisis as my wife got dead bored with my slow progress! The hardest route I've ever climbed with shoes is another 8b, Aromas del cabezon at the Cabezon de oro in Costa Blanca. Thankfully for me and my wife I sent this second go! And I've managed to on-sight up to 8a/8a+ without shoes.

What style do you prefer?
I´m 6ft. tall and not exactly a lightweight so I prefer vertical walls and slabs to overhangs. Having said that, climbing slabs barefoot is harder because of the size of the footholds - on some overhanging routes wearing shoes or not doesn't make a difference to me. Over the years I've developed a good "toe-strength” and resistance to pain but I'm always a little worried about falling barefoot. Recently I had to stop for a while because I bruised my heel in a fall.

In some respects you're quite a unique character...
In all honesty, I guess one of the reasons I climb this way is that there are very few barefoot climbers around and I don´t have to compare myself to others. It being less competitive means I enjoy climbing more.

And when you're not on the vertical?
I like reading, I love Herman Hesse and if I were a writer he´d be my idol. And I need to fix our 12 year old van every so often. Thankfully we don't need to work, we just about manage to squeeze by with the interests on what we managed to put aside.

Word has it you've trotted around half the globe
Well, for almost a year I lived in a hippy community in Andalusia, in a tipi. There I learnt Spanish and English and just enjoyed having time for myself, not having obligations or responsibilities. Then in summer I worked for a couple of months on a farm in England. In autumn I flew to New York and tramped to South America. Getting from Panama to Columbia was difficult, there was no land connection. I hitchhiked with fishermen or got lifts on ships from one island to the next. Some islands were only as big as a football field, at times it was hard to find a place to sleep. South America was wonderfully beautiful. In Peru I experimented with what the locals call "hierba del diablo" - the plant of the devil. I still don't know if the things I experienced over the next couple of days were real or illusion.
Then one day I couldn't draw any more cash, my credit card had expired and my second account was overdrawn. With my remaining money I bought a one-way ticket to Madrid. On a train to Andalusia I met Djamila, she was on holiday studying in Europe. That was February 2000. That summer I worked in England once more, then in autumn I flew to Brazil. Eight months later we got married, then travelled through South America, later Asia then back to South America. During the political unrest in Bolivia before the elections of Evo Morales we got assaulted. We decided to fly back to Europe and buy a van...

Do you still spend many months of the year abroad?
The serious globe-trekking-times are over. Having said that, this winter will be the 7th that we're going to spend in out van in Europe.

What have all these travels given you?
When I left Germany 12 years ago with a backpack it was quite a shock to experience how lost and lonely you can get in a foreign country, not speaking the language. During that first year travelling in Spain someone nicked my passport and money. Not wanting to go back I lived on the streets, begging, for a couple of weeks. During that period I thought a lot about life and although I wouldn't want to do it all over again, those days were some of the most intense in my life.

01.07.2009
Andreas Proft, 8b barefoot!
German climber Andreas Proft has managed to climb up to 8b without climbing shoes.