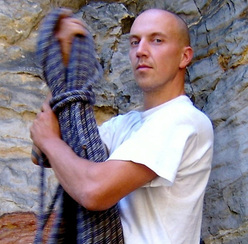 German climber Andreas Proft has managed to climb up to 8b without climbing shoes.

Climbing.com have posted a curious and slightly crazy piece of news: Andreas Proft from Germany has specialised in the art of climbing without shoes. Nothing amazing you might say. Well, Proft manages to do this up to 8b!

The 36 year old globetrotter had begun to climb without shoes on warm-up routes so as not to wear our the rubber while his wife warmed up on easier routes, but he soon found it worked so well that he continued. He explained "It still hurts to take a fall, but apart from some minor cuts on my feet I have never been injured climbing barefoot."

Proft obviously isn't the first to climb barefoot. Close to his home in Saxony for example, from 1945 onwards local climbers often ascended without shoes out of economic necessity. And in the '70's and '80's the Elbsandstein master Bernd Arnold managed to trace some of the hardest routes in the DDR barefoot whilst adhering to the strict local ethics (read extremely run-out hand-placed ring bolts and knotted slings instead of nuts).

Andreas however has undoubtedly taken the level of sport climbing one stage further. Here's a brief video of him in action, on a 8a slab in Spain. Which begs the question: who knows whether he chalks his feet before setting off?